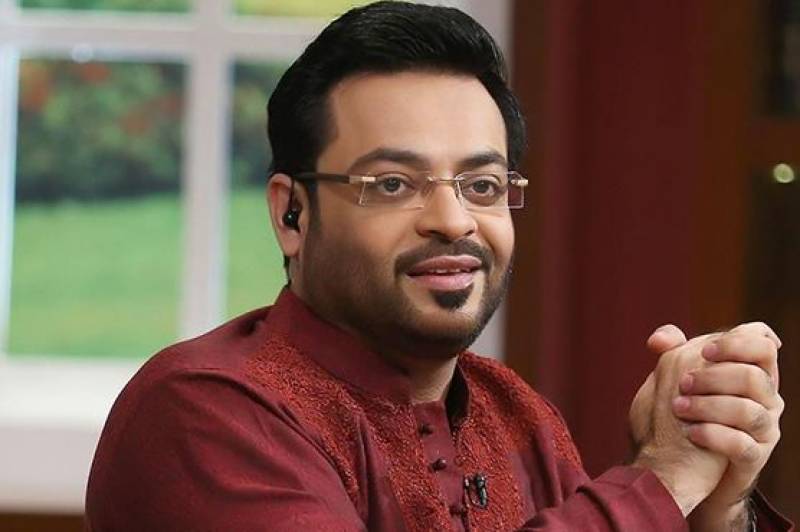 ISLAMABAD - Dr. Amir Liaqauat Hussain, is considered as a controversial anchorperson. He often plunges himself into hot waters due to the contentious statements and stirring swindle on and off screen.

This time his non-declaration of marriage contracted few months back secretly to an employee of a private TV channel has surfaced.

The rumors of him being married to Syeda Tooba Anwar, has been buzzing around since long. The din echoed more amid the huddle and noise of fast approaching, elections 2018. Amir Liaquat is contesting election from Karachi NA-245 on the party ticket of Pakistan Tehreek-e-Insaf.

His alleged second wife Syeda Tooba Anwar was working with a private TV Channel as assistant manager for the co-operative affairs.

As per the facility of verification provided by the NADRA, upon sending query from your mobile number to 7000, a person’s data of the basic credentials of specific CNIC No. can be obtained. Dunya News has validated his details from his CNIC No. and tracked his second wife’s data from her passport to obtain CNIC to further verify it from different sources including NADRA and other. ------------------------------

According to the details, Amir Liaquat tied the knot with Syeda Tooba, few months ago. His Nikah was performed by Mufti Abdul Qadir in the presence of close friends Syed Ali Imam, Hamood Munawar and Abdul Wahab as witnesses. He did not mention the details of his latest contracted marriage in his recently submitted nomination papers to the ECP. He only has mentioned his first wife Bushra Amir.

Apart from his multiple fake degree ruckuses, that have been emerging every two years one after another, the scandalous anchorperson has also been in political tumult for a while. Since, August 2017, Amir Liaquat is continuously running in havoc.

His political affiliations started from MQM from 2002 and ended in 2017 after the party head’s austere remarks against the sovereignty of the country. In March 2018, he made a chaotic entry in Pakistan Tehreek-e-Insaf and received a stern opposition and disgruntlement even from within the party.

Initially, he even has not been awarded the party ticket, but after his decry on twitter over party matters and the behavior of the PTI supporters, party took his angry outburst into consideration and allotted him the ticket for NA 245 from Karachi to contest elections.