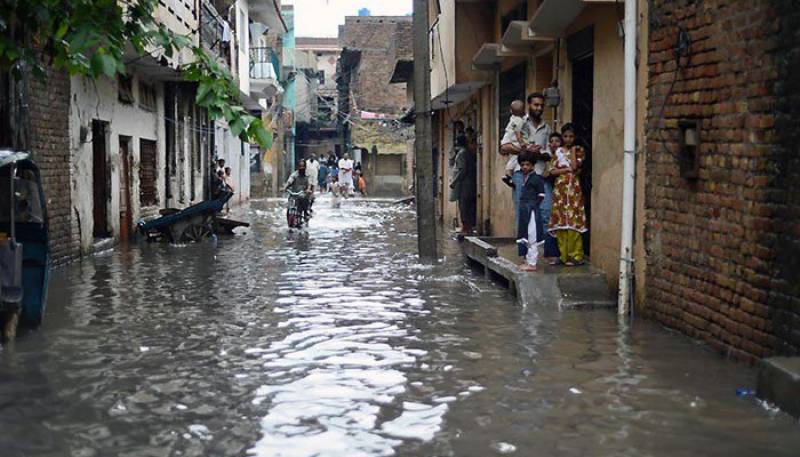 RAWALPINDI: A state of emergency was declared Sunday night after heavy rain lashed the garrison city and water flooded numerous low-lying areas, a spokesperson for the Water and Sanitation Agency (WASA) said.

Noting that the body's managing director himself was in the field with the WASA team, the spokesperson explained that 70 millimetres (mm) of rainfall had been recorded in Nullah Leh's catchment areas and that the water flow in it was normal for now.

Nevertheless, WASA's teams had been deployed across the city's low-lying areas in order to drain out the stagnating water, which was causing inconvenience to residents, he said, adding that a group had been dispatched to the Committee Chowk underpass as well which was reported to be flooded.

Further, the spokesperson noted that the water level at the stream in Gawalmandi and Katarian localities was at five and seven feet, respectively.

The water level at Nullah Leh, which cuts across Rawalpindi, often rises to dangerous levels during heavy rains, leading to flash floods in the city's low-lying localities.

Rainwater has entered a children’s hospital near Peshawar’s Haji Camp. Officials of the Water and Sanitation Services Peshawar are draining out the rainwater.

Moreover, rainwater has entered low-lying areas of the provincial capital whereas a stream on the border of Peshawar and Nowshera has flooded.

Moreover, heavy rains are expected in Hazara, Mardan and Peshawar regions of KP and Gujranwala, Sahiwal and Lahore divisions of Punjab as well, along with in scattered places across the country.