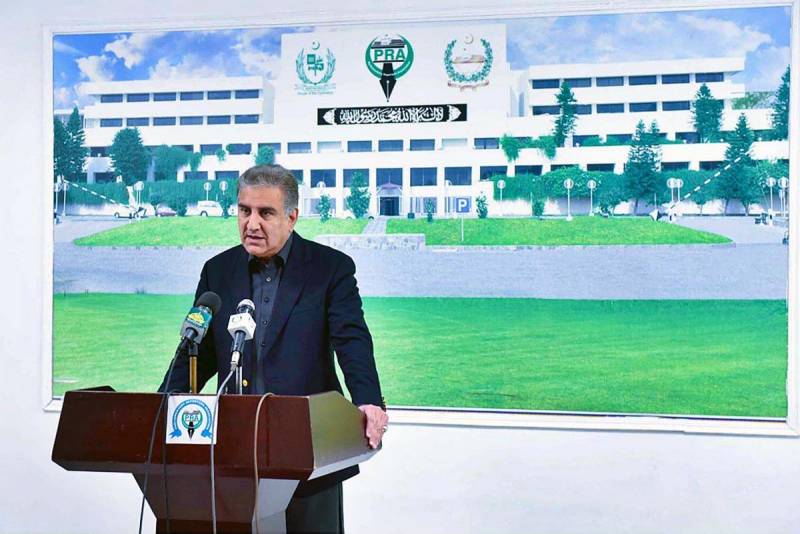 ISLAMABAD: Foreign Minister Shah Mahmood Qureshi on Monday said that India’s smear campaign against Pakistan had no limits as the neighbouring country had even misused prestigious international institutions, including the United Nations, for its nefarious designs.

“Members of European Parliament were duped, disinformed and unabashedly manipulated” and “think-tanks, researchers and even students were used as pawns to peddle Indian fallacies,” the foreign minister said addressing the concluding session of a seminar on ‘Disinformation as a Tool of Strategic Warfare’ organised here by the Institute of Regional Studies (IRS).

Referring to the recent report of EU Disinfo Lab titled ‘Indian Chronicles’, he shared that the government of Pakistan had called upon the international community to take due cognizance of India’s systematic designs to damage Pakistan’s image and international standing.

Qureshi said that he had written to the EU High Representative, asking him to make India accountable for its misdeeds that had been unearthed by an independent not-for-profit organization funded by the EU itself.

Qureshi said that Pakistan’s Permanent Representative to the UN in New York had written to the chair of the NGO committee in ECOSOC to de-register the 10 fake NGOs (non-governmental organisations) identified in the *Indian Chronicles*.

He viewed that the *Indian Chronicles* had revealed the real face of India and its hate for Pakistan, and termed maligning Pakistan an article of faith for the Bharatiya Janata Party- Rashtriya Swayamsevak Sangh (BJP-RSS) dispensation in New Delhi.

1. The use and abuse of information technology; 2. The reality of the post-truth world where facts were constructed and misconstrued; 3. The inability of international institutions to adapt to this new reality of fake news.

Senator Mushahid Hussain Syed called for busting of myths about propaganda, stating that such misinformation and fear-mongering tactics were only linked to dictatorships. It was only employed in a situation of war, and it was only orchestrated through state-controlled media, he maintained.

He said that India’s disinformation campaign against Pakistan was a new form of international aggression because it was conducted for 15 years to malign a neighbouring country against which India did not have active hostilities.

He condemned Indian tactics of spreading falsehoods about the China-Pakistan Economic Corridor (CPEC).

Professor Glenn Diesen of the South Eastern University of Norway, who addressed the seminar virtually, stated that while the attempts by states to promote a national narrative were not new, international redistribution of power and the emergence of new technologies had emerged more recently.

Internal Revenue Service (IRS) President Ambassador Nadeem Riyaz urged the governments and people to work together to ensure that people and governments were not led astray with fake news, propaganda, and false narratives.

It could only be safeguarded with news literacy, high-quality journalism, and social responsibility, he added.