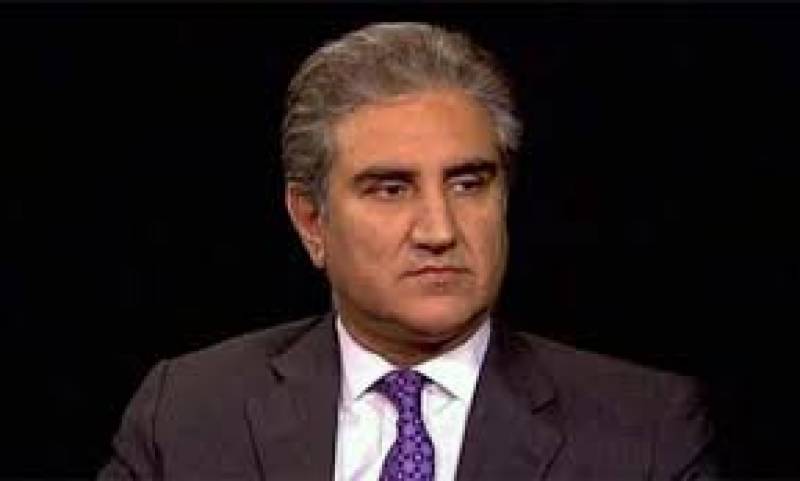 ISLAMABAD: Foreign Minister Makhdoom Shah Mamhmood Qureshi drew the attention of the President of the United Nations Security Council (UNSC) towards the deteriorating situation in the region resulting from Indian belligerence and threats of use of force against Pakistan, in the wake of Pulwama attack.

The Foreign Minister in a letter addressed to the President of UNSC gave an account of how India within moments of the February 14, Pulwama attack began accusing Pakistan and started threatening retributive action.

Mentioning the continued Indian atrocities against innocent Kashmiris fighting their right to self determination, Qureshi also reminded the UNSC President of the UN Security Council resolutions on the Kashmir dispute that stipulate the holding of a democratic and impartial plebiscite to enable the people of Jammu and Kashmir to determine their own future.

The Foreign Minister also attached with his letter the documents containing the key points of Prime Minister Imran Khan’s address to nation on this subject on February 20, as well as the statement issued after the February 21 meeting of the National Security Council chaired by the Prime Minister.

Following is the text of the letter that the Foreign Minister addressed today to the President of the United Nations Security Council (UNSC):

"It is with a sense of urgency that I draw your attention to the deteriorating security situation in our region resulting from Indian belligerence and threats of use of force against Pakistan. The situation poses a threat to international peace and security.

As you are aware, there was an attack on a Central Reserve Police Force (CRPF) convoy in Pulwama district of the Indian Occupied Kashmir (IOK) on 14 February 2019. Within moments of the attack, without holding an investigation or providing any proof, India began accusing Pakistan and started threatening retributive action. The entire basis of India’s unfounded allegations was a social media video of completely suspect content.

It is clear that India is making the attempt to present its fallacious assumptions as established facts, seek to cover up its own operational and policy failures, and shift the blame to Pakistan.

Simultaneously, for domestic political reasons, India has deliberately ratcheted up hostile rhetoric against Pakistan and created a tense environment. The Prime Minister of India, in several public statements, stoked passions and threatened a “befitting response.” Among other things, the Indian Prime Minister said: “… [T]here is a lot of anger, people’s blood is boiling……The next steps will be taken by our armed forces. What should be the time, what should be the place and what should be the form - they have been authorized to take all the decisions.”

Separately, senior members of the Indian Government are threatening to use water as a weapon. The long-standing legal arrangements agreed under the Indus Waters Treaty (IWT) are thus being imperilled.

For its part, the Government of Pakistan has strongly rejected Indian allegations of involvement in the Pulwama attack, without any investigation or provision of evidence. Pakistan has offered its cooperation, if tangible evidence emerging from credible investigation is shared. The Prime Minister of Pakistan has also announced Pakistan’s readiness for talks with India on the issue of terrorism along with other disputed issues. Pakistan has also reaffirmed its resolve to defend itself against any act of aggression by India.

The frenzy created by the Indian Government has resulted in reprisal attacks against Kashmiris in IOK and in several states of India. It is a matter of record that the people of occupied Jammu & Kashmir are being punished because they are demanding their inalienable right of self-determination – pledged to them by India, Pakistan and the international community. The UN Security Council resolutions on the Kashmir dispute stipulate the holding of a democratic and impartial plebiscite to enable the people of Jammu and Kashmir to determine their own future.

The people of occupied Jammu & Kashmir are counting on the international community to take immediate cognisance of their unending plight, initiate steps to bring an urgent halt to the horrendous violations of human rights taking place in IOK, and enable them to exercise their right of self-determination under the relevant UNSC resolutions.

I take this opportunity to underscore the need for the world community to dissuade India from its current war-mongering. India must refrain from escalating the situation and enter into dialogue with Pakistan and the Kashmiris to ensure de-escalation and continued peace and stability in South Asia.

I have already apprised the UN Secretary General Antonio Guterres of the serious situation and underlined that the United Nations must step into defuse the current tensions. We would also keep the Security Council members abreast of the evolving situation.

I am attaching with this letter a document containing key elements of the address that the Prime Minister of Pakistan, His Excellency Imran Khan, delivered on this subject of Pulwama attack on 20 February 2019.Also enclosed is a copy of the Statement issued after the meeting of the National Security Council (NSC), chaired by Prime Minister Imran Khan, on 21 February 2019.