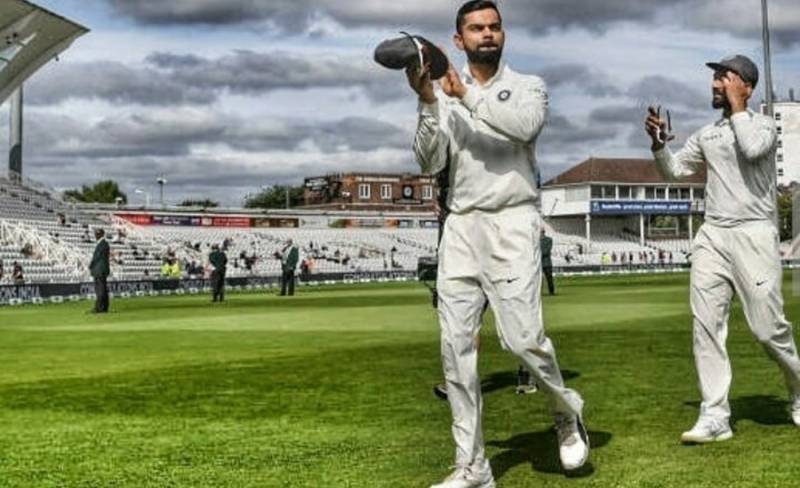 DUBAI – Virat Kohli returned to the top of the ICC Test Rankings for batsmen after his scores of 97 and 103 in the Trent Bridge Test against England helped India to a 203-run victory on Wednesday.

Kohli’s feats took him to 937 rating points – the highest he’s reached so far – and that helped push him back atop Steve Smith in the charts. Kohli had reached the No.1 spot after totalling 200 runs in the first Test at Edgbaston, but scores of 23 and 17 at Lord’s meant he slipped back down.

His rise after India’s impressive victory at Trent Bridge was one of several gains made by Indians across departments in the latest update.

No one impressed more than Hardik Pandya. The all-rounder had come into the series with critics questioning his place in the side, but he answered them with his maiden five-wicket haul – a 5/28 in the first innings – and a run-a-ball 52*.

It meant Pandya rose to No.51 in the batsmen’s rankings, a jump of eight spots, but his rising stock was more keenly felt in the bowlers’ charts: he moved up 23 places to No.51, with a career-high 340 points.

His all-round display meant he also moved up significantly in the all-rounders rankings: he now sits at No.17, after a massive jump of 27 places.

Jasprit Bumrah was another Indian who impressed. He was unavailable for selection in the first two Tests due to injury, but he made his presence felt in his first match on tour. His 5/85 in the second innings accounted for Joe Root, Jonny Bairstow and Jos Buttler, who had scored his maiden Test century. It helped Bumrah, after just four Tests, move up to No.37 in the rankings.

Shikhar Dhawan, who returned to the side after being dropped at Lord’s, and Ajinkya Rahane, who found much-needed form again with a crucial 81 in the first innings, both moved up four places. Dhawan now sits at No.22 in the batsmen’s rankings, three places below Rahane at No.19.

It wasn’t all doom and gloom for England. Buttler’s efforts at frustrating India, something he did with considerable success by scoring a 176-ball 106 in the second innings, helped the England vice-captain move up 22 places to No.47 in the batters’ chart.

Adil Rashid, who picked up four wickets in the match and scored 33* in the second innings, made gains as well: he jumped up eight spots among both batsmen and all-rounders, and is now 116th in the batting charts and 43rd among all-rounders.

Chris Woakes couldn’t repeat his heroics at Lord’s and fell nine places to No.59 among batters, although he did move up by one place among bowlers and is now ranked No.31.

Joe Root and Jonny Bairstow both fell by two places in the batting charts, and are now 5th and 11th respectively.