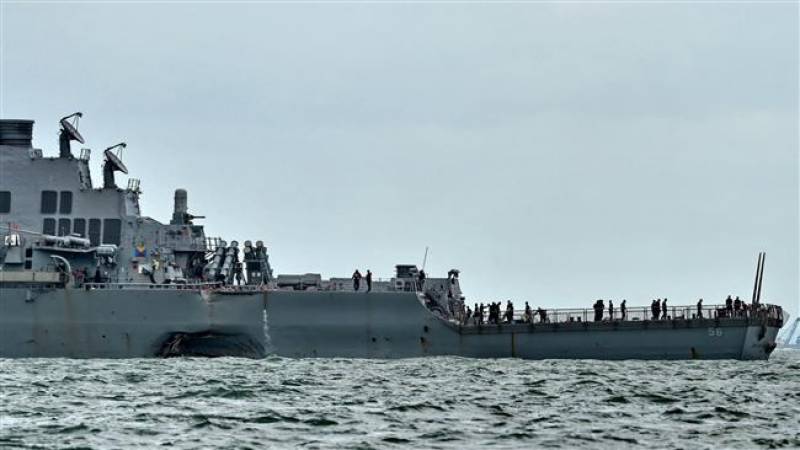 The US Navy has ordered a worldwide "operational pause" following the collision of the USS John S. McCain and a cargo vessel in the Pacific Ocean.

The USS John S. McCain collided with the oil tanker Alnic MC on Monday morning local time while the guided-missile destroyer was passing near the Malacca Strait to make a port visit in Singapore, the Navy's 7th Fleet said in a statement.

The dramatic pre-dawn collision, which left 10 sailors missing and five people injured, was the second major accident involving a US warship in two months.

"This trend demands more forceful action. As such, I have directed an operational pause be taken in all of our fleets around the world," Navy Admiral John Richardson, the chief of naval operations, said in a statement on Monday.

"I want our fleet commanders to get together with their leaders and their commands to ensure that we are taking all appropriate and immediate actions to ensure safe and effective operations around the world," he added.

"In addition to that operational pause I have directed a more comprehensive review to ensure that we get at the contributing factors, the root causes of these incidents,” he continued.

Meanwhile, US Defense Secretary James Mattis said on Monday that Richardson’s review is part of an extensive investigation to “look at all related accidents, incidents at sea. He is going to look at all factors, not just the immediate one."

“We obviously have a [separate] investigation underway that will determine what happened,” Mattis said.

A search operation involving ships and aircraft from three countries was underway on Monday for the missing sailors following the deadly collision.

In June, another guided-missile destroyer, the USS Fitzgerald, collided with the Philippine-flagged merchant ship ACX Crystal 56 nautical miles southwest of Yokosuka, Japan. Seven US sailors were killed in that collision.