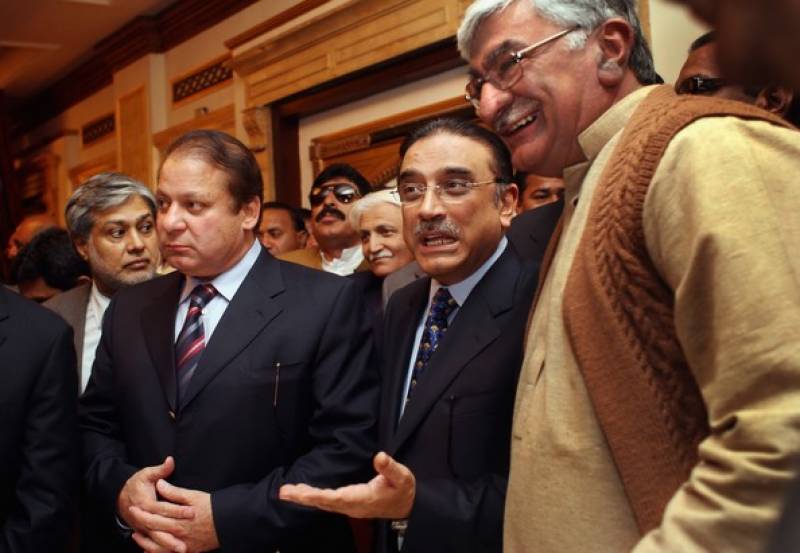 ISLAMABAD: Minister for Privatization, Daniyal Aziz Tuesday said the strategy for initiating a grand national dialogueto ensure supremacy of law and Constitution, would be finalized withina week.
“We are devising a communication strategy that is in final stagesand the dialogue process will hopefully be initiated in a week,” he said while addressing a press conference here.The minister said domestic and international media, dignitariesand global legal bodies would be engaged in devising a way-forwardstrategy.
“CPNE, APNS, Pakistan Broadcasters Association and otherorganizations will have a role to play for the purpose,” he said.The minister said lawyer organizations, law educational institutions and bar associations would also be approached so that the strategy covering all legal aspects should be devised.
The grand dialogue aimed at devising a mechanism wherein all theconstitutional entities of the country worked in their domains and themedia would have the leading role in that regard, he added.
He said many people, including Mehmood Khan Achakzai, Aftab AhmedKhan Sherpao and Maulana Fazl-ur-Rehman, had already agreed to becomepart of the grand dialogue and the process was continuing.
“The objective is to ensure supremacy of the constitution and lawso that no institution or individual could target any individual,” headded. He said there was need that the youth must get employment,there was low inflation, and the country’s affairs were running smoothlywithout any interference or lockdown.
He said Imran Khan and his associates were misleading people inthe name of respect of law, but it was ironic that he himself was disrespecting the institutions. He said Imran Khan was not appearing before the courts in several cases and was engaged in disrespecting the constitutional institutions.

He (Imran) even could not produce evidence in the Supreme Court and the case of his associate Jahangir Tareen had been lingering for a year, he added.The minister said the people, who were delivering sermons for respecting institutions, themselves did not respect the institutions.
But Nawaz Sharif not only presented himself before the court but also presented his whole family, which showed his respect for theconstitutional institutions, he added.He opined that the National Accountability Bureau (NAB), whichhad been dead for long, was activated to victimize Nawaz Sharif.
Some 179 cases involving public money of Rs 1,083 billion had beenpending before the NAB, but as to why the cases pertaining to NawazSharif were being pursued by it vigorously, he questioned.
He viewed that those who are elected by the people through vote must be respected, as otherwise it would harm institutions.
Tags: