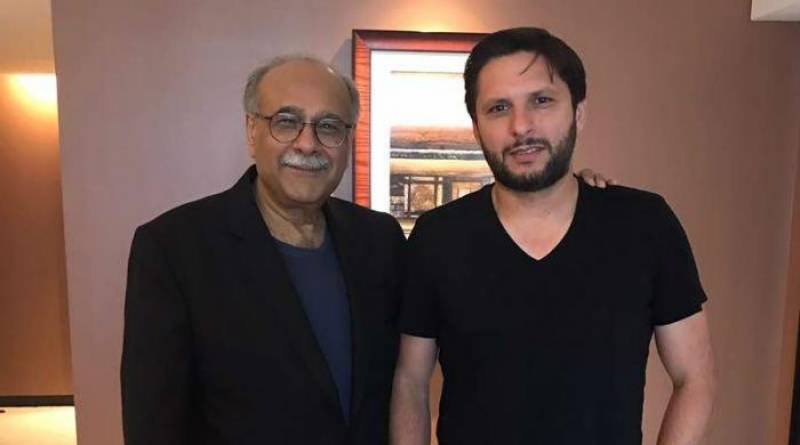 DUBAI: Shahid Afridi has finally managed to meet Najam Sethi in order to get a farewell for himself.

Shahid Afridi has long been asking for a grace full farewell for all retiring cricketers.

Shahid Afridi on Sunday met Najam Sethi in Dubai to discuss the options for a farewell event and future working with the Pakistan Cricket Board.

Afridi, who last played for Pakistan in 2016, was in news for his intentions of seeking a farewell match, which he couldn’t get, but now PCB has indicated that they will provide the former captain with a proper send-off.

Najam Sethi, after the meeting with Afridi, confirmed on social media that he discussed ideas for a farewell and future working with the PCB for benefit of Pakistan Cricket.

“@SAfridiOfficial and I had a wonderful chat. Ideas for a fitting farewell & future contribution to cricket were also discussed,” posted Najam Sethi on his Twitter profile.

Sethi had earlier stated that Shahid Afridi was Pakistan’s hero while inviting him to a meeting earlier this month.

Afridi, a veteran of 398 ODIs and 98 T20Is, confirmed that he met with Najam Sethi and discussed the farewell options and he’ll reply to PCB’s offer soon.

“It was nice meeting you @najamsethi . Appreciate your suggestions. Will revert soon inshallah,” Afridi responded on Twitter.

Earlier, Afridi had suggested that he was looking to set a trend for players allowing them to step out of career in a graceful manner.