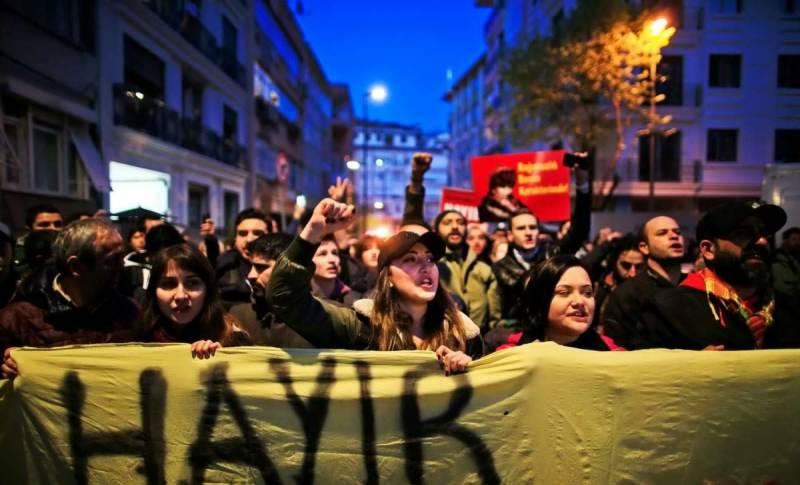 The  Yes  camp won 51.41 percent in last Sunday s referendum in a tighter-than-expected win, but opponents claim the result would have been reversed in a fair poll.

Nearly 1,000 people made up of supporters from the Republican People s Party (CHP) demonstrated in Taksim square on the western side of Istanbul against the result and to mark a public holiday, an AFP correspondent said.

The protest took place on the 97th anniversary of the establishment of the Turkish parliament, known as National Sovereignty and Children s Day.

Across the Bosphorus, in the district of Kadikoy, hundreds more protested carrying placards saying: "The  No  hasn t finished, it s only just begun" and "No, we won".

Some held a large banner saying "Cancel the referendum" while others held gold balloon letters spelling out "Hayir" meaning "No" in Turkish, an AFP photographer said.

The tight result has been disputed by the opposition after the top election authority known as the Supreme Election Board (YSK) made a last-minute decision on Sunday to accept ballot documents in envelopes without an official stamp.

But the CHP had its bid with two other parties to annul the referendum rejected by the YSK last week.

The party also launched a legal challenge in the country s top administrative court on Friday in a bid to cancel the YSK decision on the ballots which opponents argue opened the way for fraud.

On Sunday, parliament held a special session for the holiday which resulted in heated debates between CHP leader Kemal Kilicdaroglu and Prime Minister Binali Yildirim.

Yildirim defended the changes, saying it would "further strengthen the parliament" and had been prepared by people s representatives who then took it to the people to decide, NTV broadcaster reported.