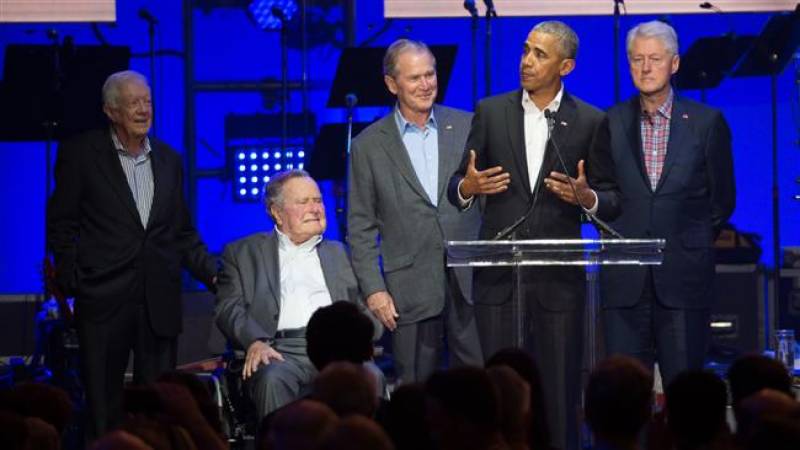 WASHINGTON - Five former US presidents have attended a concert held in Texas to raise money for victims of devastating hurricanes that have swept through southern United States and Caribbean, amid criticism  of the Trump administration's inadequate response.

The concert reportedly helped raise over $31 million from 80,000 donors for the victims of hurricanes Harvey, Irma and Maria.

"All of us on this stage here tonight could not be prouder of the response of Americans. When they see their neighbors and they see their friends, they see strangers in need, Americans step up," Obama said.

"I too am here to urge you to give to this fine fund, and I want to thank all the volunteers," said the younger Bush.

Clinton said, "It can be a new beginning if we just do what we ought to do and prove that the heart of America, without race or religion or political party, is greater than our problems."

President Donald Trump, who had recorded a video message for the event, said the American people "came together as one" after a series of hurricanes hit Texas, Louisiana, Florida, Puerto Rico and the US Virgin Islands in recent weeks.

He also thanked the five presidents for helping to spearhead the effort, describing them as "some of America's finest public servants."

Harvey tore through Texas and then Louisiana in August, and Irma slammed Florida in September. Hurricane Maria ripped through the Caribbean in late September, devastating several islands, including Dominica and Puerto Rico, a US territory.

Trump has come under fire for his response to the hurricanes.