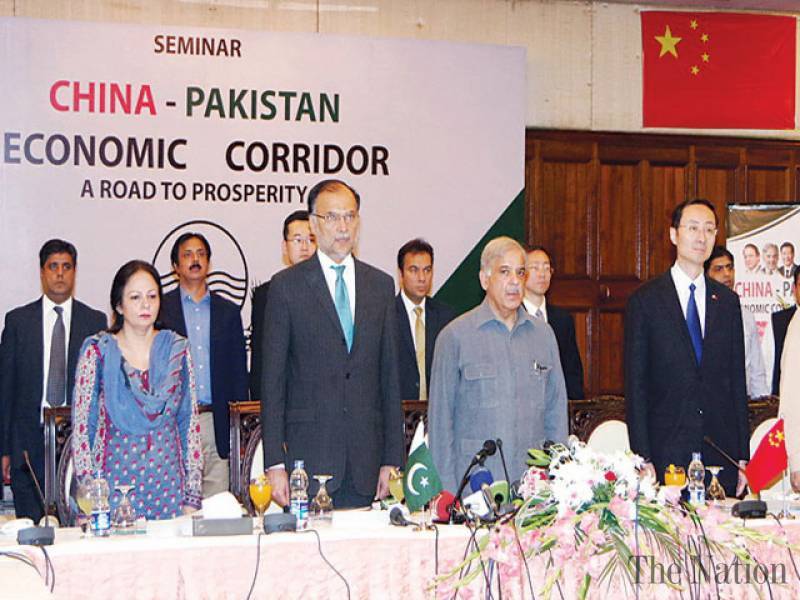 Friendly relations between Pakistan and China were more than ordinary relationship between the two countries and could not be described in words, he added.

The Chief Minister was addressing a function at the 65th anniversary of diplomatic relations between Pakistan and China at Chief Minister's Office, here.

Shehbaz Sharif said that relations of mutual confidence and respect between the two countries during the last 65 years were based on love and sincerity.

He said that a number of changes occurred in the world during this period but China had stood by Pakistan as a rock.

He said that China extended all out cooperation to Pakistan in United Nations and Security Council on international issues and supported its stance.

He said that China had supported Pakistan like a true friend in war and peace and at the time of natural calamities.

He said that though the journey of love was continuing between Pakistan and China during the last 65 years but economic and trade cooperation between the two countries did not reflect it.

However, he said, during the present tenure of Prime Minister Muhammad Nawaz Sharif, a new era of friendship and economic cooperation between Pakistan and China had started and the mutual friendship between the two countries was touching new heights.

He said that under China Pakistan Economic Corridor, energy and infrastructure projects were being implemented speedily in Sindh, Balochistan, Khyber Pakhtunkhawa, Punjab and all parts of the country and their completion would result in progress and prosperity in the country and the CPEC would leave a positive impact on the region.

The Chief Minister said that efforts had been made on different occasions in the past to further the process of mutual friendship between Pakistan and China.

He said that relations between the two countries were higher than ordinary friendship and diplomatic relations.

He said that the relationship of love, sincerity and confidence started 65 years ago was being furthered with new determination and spirit.

He said that Pak-China friendship was of special importance in the world community and the people of two countries were very close.

He said that due to the efforts of Prime Minister Muhammad Nawaz Sharif and Chinese President, the friendship between the two countries had further strengthened and economic cooperation increased.

He said that when CPEC agreements were signed during the visit of Chinese President to Pakistan in April last year, there were speculations that these agreements would never take a practical shape but the world saw that within two to three months of the signing of the agreements work was started on the projects and with their implementation the journey of progress and prosperity had started in Pakistan.

Shehbaz Sharif said that from Washington to Tokyo, Tokyo to Delhi and Casablanca, the whole world was surprised that process of investment of billions of dollars by China in Pakistan had started.

He said that it was the proof of deep love and friendship of China with Pakistan.

He said that under CPEC, investment of billions of dollars was being made in energy projects and completion of these projects would result in generation of thousands of megawatts electricity due to which industry, agriculture and other sectors in Pakistan would progress and lakhs of new job opportunities would be created.

He said that Pakistan would progress economically, regain its lost status in the comity of nations, would get rid of begging and would become a country which could give aid.

He said that this story of Pak-China friendship and economic cooperation between the two countries would be remembered forever and when the historian would write this history he would write about the role of China in the progress and prosperity of Pakistan in golden letters.

He said that just as love was unconditional, similarly, China had extended unconditional cooperation to Pakistan during the last 65 years which was the true story of mutual love between the two countries.

He said that it was a happy moment in the history of Pakistan when projects under CPEC were being set up throughout the country. He said it had never been seen before that implementation of the projects started within two to three months after signing of agreements.

The Chief Minister said, "We have gathered to celebrate this beautiful journey and CPEC and this bond of mutual love and friendship will continue till future generations."

Referring to Lahore Orange Line Metro Train, Shehbaz Sharif said, "China has given the gift of orange line metro train for improvement of our public transport system and although it has no link with CPEC but this project is also an example of Pak-China friendship."

He said that Chinese leadership had given metro train project to Prime Minister Muhammad Nawaz Sharif and the Punjab government as a gift so that modern transport system could start here.

He said that work was being carried out speedily on this modern project and with its completion, dignified and speedy transport facilities would become available to the people.

He said that by opposing this project, some political elements who were enemy to progress of the masses had not shown wisdom and tried to create hurdles in this public project through protests for the achievement of their personal interests.

He said that some elements had got stay orders from the court on the excuse of its effect to the historical heritage.

He hoped that the courts would decide this matter on merit.

He said that unfortunately those who were talking about effect to the historical heritage of Shalamar Bagh due to metro train project had never seen Shalamar Bagh.

He said that these persons along with their pet dogs went to South America and other European countries for vacations and had no interest in the poor people of Pakistan.

He said that in the history of the world, no country or bank gave funds for any project against which stay order had been issued by the court but despite all this uncertain situation, China had given the first installation of 33 billion rupees for the project and China had changed and written a new history by providing funds for this project.

He said that it was an expression of the relations of friendship and love of China.

He said, "China has given historic investment package of 46 billion dollars to Pakistan and we should fully benefit from this package."

Shehbaz Sharif also saw a pictorial exhibition with regard to 65 years diplomatic relations between Pakistan and China.