PTI stalwarts veiled attacks on each other
22 Jun, 2018 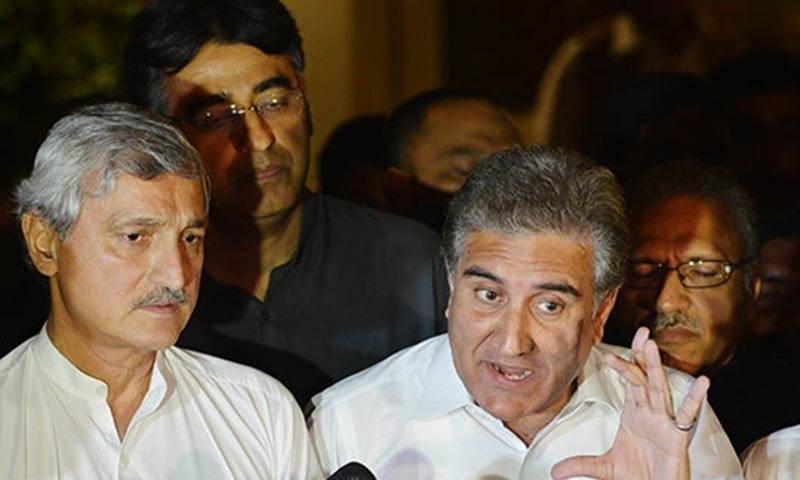 ISLAMABAD - PTI leader Shah Mahmood Qureshi on Friday said he did not consider Jahangir Tareen a competitor since he cannot contest the polls.

During a press conference in Islamabad earlier today, Qureshi said that he only believed in competing with others in the political arena.

"My competition is in the political arena and a person who cannot even contest the election, who is not part of the game, is not my competitor," the PTI leader said. "I am not insane to compete with Tareen."

Responding to Qureshi's statements, Tareen said that he would respond to the PTI leader after listening to it. "I do not like talking against anyone,” he stated, He, however, stated that Qureshi should not shift blame and instead resolve grievances of the residents of his district.

Qureshi also spoke about the internal rifts in the party with regard to the ongoing protests over ‘unfair’ ticket distribution from South Punjab. PTI workers have continued to protest for four days outside party chairman Imran Khan’s residence in Bani Gala on the issue of party tickets for General Election 2018.

The party workers, primarily belonging to the NA-154 and NA-12 constituencies, have said that Sikandar Bosan should not have been allotted a party ticket. Workers said Imran had neglected ideological workers at the time of allotting tickets.

Discussing the protest, Qureshi said the party workers had a right to protest. However, he also questioned the moral courage of those allegedly conspiring against the party.

"Who is supporting Sikandar Hayat Bosan and who wants to bring him forward? Why don't they own their decision to support Bosan?" the PTI leader said.

Shah denied accusations of nepotism in ticket distribution. "I feel for the protesting party workers," he said, stressing that the final decision to distribute tickets will be made by the party chief.

"I have told Khan sahib that the final decision will be his. I have no objections to the allotment of tickets to anyone and I will not be adamant to allot tickets to my relatives. I will never give preference to any relative over my ideology," he said.

"I will accept any decision that the party makes. It is the right of a person to submit a request and present arguments. However, accepting the decision is the discipline of the party."

The PTI chief has failed to pacify protesting party workers despite assurances that he will review the party's decisions regarding awarding tickets for the upcoming elections.