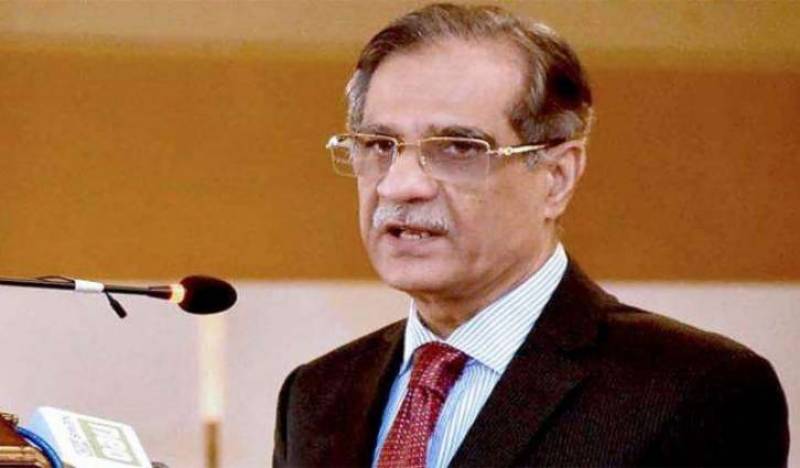 KARACHI: Chief Justice of Pakistan Justice Mian Saqib Nisar assured on Sunday that the Supreme Court is at the forefront of protecting the fundamental rights of all citizens.

"We mean business when it comes to human rights," the chief justice said while addressing a ceremony after inaugurating a water filtration plant in Karachi.

Speaking about the water crisis, the CJP stressed, "Water is extremely important and we have to conserve it."

"The only one way to conserve water is to reserve it and use it carefully," he said.

The top judge recalled that during his recent visit to Gilgit, locals informed him that they were extremely happy to hear of the construction of Diamer-Bhasha Dam.

Further, the chief justice urged, "I have no personal agenda. We have to work for the welfare of our future generations."

Shifting focus to Karachi, the chief justice said, "I was happy to see the roads today and there has been noticeable change in the city over the last six months."

"Karachi is much cleaner today," he remarked.

As the chief justice arrived at the Karachi registry to resume hearing public interest cases after a private sojourn to Gilgit-Baltistan, he walked over to the protesting residents.

Residents of Karachi's Martin Quarters and FC Area localities are protesting against the eviction notices to them for vacating illegally occupied government residences.

Assuring the protesters that he understands their plight, Chief Justice Nisar stated, "I am here until 6pm today and will hear your pleas. I just have to go to inaugurate a water filtration plant for your benefit and will return around noon. Please come see me after 1:30-2pm."

Taking up the protesters' plea after his return, the chief justice issued notices to the provincial and federal governments and adjourned the hearing until July 30.

He observed during the hearing that if the protesters' claims are legitimate, they will get justice but also termed illegal occupation of government houses unjustifiable.

On the night of July 16, residents of the two localities took to the streets outside the Muttahida Qaumi Movement’s (MQM) Bahadurabad office after they were served eviction notices.

MQM leader Kanwar Naveed Jamil had said the protesters had been living in the area for a long time and asking them to leave is unjust, adding that they have been MQM voters for the past 30 years.

During Sunday's hearing, the chief justice also heard several other cases pertaining to public interest issues, including load-shedding in Karachi.

CJP to hear cases in Lahore from tomorrow

After concluding the hearing of cases in Karachi today, the chief justice will hear several public interest cases, mostly initiated as suo motu notices, at the Lahore registry from tomorrow till the end of the week.

A three-judge bench headed by Chief Justice Nisar and comprising Justices Umar Ata Bandial and Ijazul Ahsan has been constituted to hear the important cases.

The cases to be heard by the bench in Lahore include those involving exorbitant fees of private medical colleges, disposal of hospital and sewage waste, air pollution, discharge of untreated waste by a chemical factory and lack of adequate healthcare facilities in Defence, according to media reports.

Moreover, the Lahore registry has notified that though July 25 has been declared a court holiday due to the general election, the chief justice will be at the Supreme court in Lahore for hearing of any urgent cases.