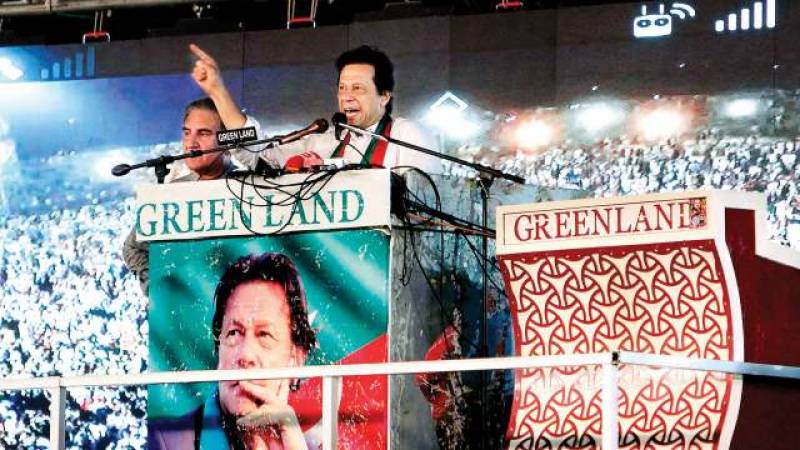 NEW DELHI - Like other world capitals, India is observing with interest as July 25, the date for polls in Pakistan, draws closer. The polls are even more interesting as unlike in the past when power used to swing alternately between Nawaz Sharif’s Pakistan Muslim League (PML-N) or the Pakistan Peoples’ Party (PPP) led by the Bhuttos, there is now an emergence of a serious third player — cricketer-turned-politician Imran Khan, who is the leader of the Pakistan Tehreek-e-Insaf (PTI). While Khan was a player in the past election as well, he was never a formidable contender for the prime ministerial post. With Sharif’s problems that may change this time.

In India, all those interested in events in Pakistan always had ample interaction with their leaders and exposure to the policies of the PML-N and the PPP and even with religious figures like Maulana Fazl-ur-Rehman, president of the Jamiat Ulema-e-Islam. But the PTI remains a puzzle and as a result think-tanks are examining the party’s governance pattern in the north-western Khyber Pakhtunkhwa (KPK) province, where it has ruled for the past five years, for clues as to what kind of governance it will provide if it does come to power.

The other factor behind the PTI’s mystery is that Imran Khan has no political constituency in India. In earlier years, the Gandhi family shared a bond with the Bhuttos in Pakistan and the security establishment here views Nawaz Sharif as a mature and credible face when it comes to relations with India. Imran Khan, with his rabidly anti-India speeches, will certainly not provide this kind of bonhomie and so if he does come to power there may be uncertain times ahead. But as India and Indians know too well, Imran has not been alone in his anti-India stance. In 2007, when the late Pakistan prime minister Benazir Bhutto visited India and met then prime minister Manmohan Singh, she complained about India’s ‘indifference’ towards the restoration of democratic rule in her country and its ‘coziness’ with military ruler Pervez Musharaf. Bhutto told Singh about the help she had provided to Rajiv Gandhi to stamp out militancy by taking action against Khalistani secessionists in Punjab and complained that in return Rajiv Gandhi had failed to keep his promise to pull out troops from Siachen. But soon after Bhutto’s meeting with Singh, then National Security Advisor (NSA) M K Narayanan minced no words, saying the PPP was unreliable. He said the Bhuttos are democratic and show sympathy towards India as long as they are in Opposition but turn fiercely anti-India when they come to power.

It isn’t just Bhutto. Nawaz Sharif does invoke soft feelings in India. His Punjab connection with Inder Kumar Gujral produced some positive results, leading to the setting up of the composite dialogue process in 1997. Soon after his dismissal in 1999, Gujral disclosed that the PML-N chief had helped to avoid a big disaster in Kashmir, by helping to nab five terrorists who had procured Stinger missiles. According to Gujral, he had warned Sharif that if any aircraft was targeted in Kashmir it would be treated as an act of war. Better sense prevailed and these heavy armaments, left over by the US in Afghanistan, didn’t make their way towards Kashmir.

A year later, when India was feeling the isolation after nuclear detonation, Sharif agreed to receive AB Vajpayee who had then undertaken the bus journey to Lahore. But the ‘ghost’ of the ‘Kargil betrayal’ remains and despite the recent positive memories of PM Modi landing in Lahore to attend the marriage ceremony of Sharif’s grand-daughter, this ghost has yet to be exorcised.

With such feelings for Pakistan’s politicians and a realisation that whatever be the electoral outcome, India has to now deal with a government that has the confidence of Pakistan’s actual power centre, the army, dealing with the likes of Imran Khan, becomes a little more predictable. It is a given that any politician who wins this poll will be propped up by the army and a stable democratic structure for Pakistan seems a remote possibility for the near future.

As a result, there is a strong impression gaining ground that New Delhi needs to have direct contact with Pakistan’s military rather than just with the civilian government, a policy that the US, Afghanistan, and many other western countries follow. Reports suggest that current Pakistan military chief General Qamar Javed Bajwa has been giving vibes of late, showing an inclination to talk to India directly. Former RAW chief AS Dulat had also recommended recently that the NSA should open up channels directly with Bajwa and even invite him to Delhi.

If India was to follow this policy, it may finally deal with Pakistan’s realities. New Delhi has tended to forget the fact that the middle class forms the ‘spinal cord’ in a parliamentary democracy likes ours. It forms 21.36 per cent in India’s 125 crore population, while it is a mere 6.8 per cent of the 25 crore population in Pakistan. Also, the army’s limited role in India could also be attributed to the fact that the number of army men in India account for just 0.136 per cent of total population, while it is almost 0.5 to 1 per cent in Pakistan. To ignore such a large population is not possible, which besides an establishment contributes to the electorate as well.

With direct talks with the military on the anvil and growing anxiety on Imran Khan’s policy statements, where he has promised to limit the US’ role, India-Pakistan relations are set to go through another phase. If Imran really implements this policy after assuming office it will hit India’s interests in the region, especially in Afghanistan. What’s more, India also will go into election mode and new equations are once again likely to be formed. Whatever the outcome, it is imperative that both countries adopt a wait and watch policy while keeping relations workable.