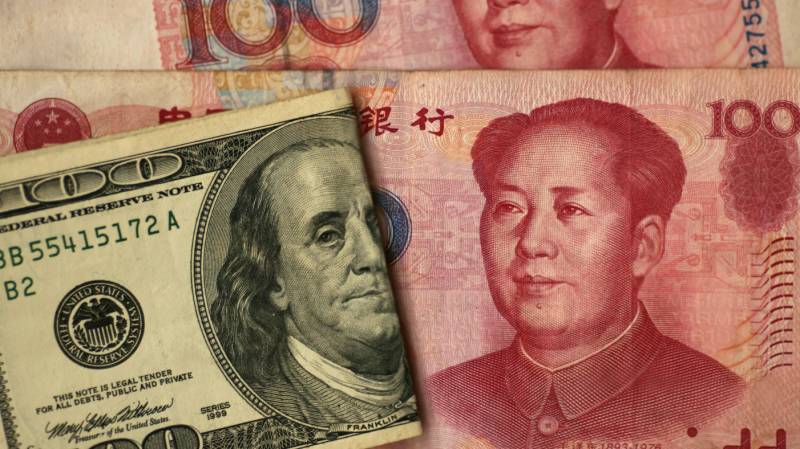 ISLAMABAD - Pakistan and China start to ditch US dollar in $20 billion trade.

China is a trillion dollar economy, trillion dollar exports and imports, surplus in current account, high and growing per capita income with low level of inflation, unemployment and certainly lower interest rate’, this was stated by Engr.

Daroo Khan Achakzai in his welcome address to Airdy, CEO ICBC Pakistan along with his team who visited Federation of Pakistan Chambers of Commerce and Industry and held a meeting with FPCCI members and apprised them of the benefits of under taking trade in RMB currency.

The FPCCI Chief underscored the need to use RMB as trading currency between Pakistan and China. He said that Currency Swap would be mutually beneficial and go a long way in strengthening economic ties between the two neighboring countries.

He also highlighted that average trade volume between Pakistan and China is about US$ 20 billion annually in which imports from China is US$ 18 billion and export from Pakistan to China is merely US$ 2 billion.

There is a huge export surplus of US$ 16 billion in the favor of China. “That is why, Pakistan and China signed bilateral Currency Swap Arrangement to reduce the pressure on the foreign exchange reserves and give a quantum jump to the bilateral trade between the two countries”, he said.

The FPCCI President also appreciated the services rendered by ICBC in the backdrop of capital-intensive mega investment projects of CPEC and China Pakistan Free trade Agreement (CPFTA) in implementing and facilitating bilateral trade in RMB.

Thus, reducing the ever-increasing pressure on SBP foreign exchange reserves. Airdy, CEO of ICBC Bank informed that RMB is now approaching its final frontiers, full convertibility and transformation into a “normal” currency used by companies and individuals in some countries especially southeast Asia and regions such as HK MACAU etc. TMB usage in trades and investment with China has opened the door to many new opportunities.

He said that SBP has taken comprehensive policy related measures to ensure that imports, exports and financing transactions can be denominated in RMB. All public and private sector enterprises (both of Pakistan and China) are free to choose RMP for bilateral trade and investment activities.

Citing some facts and figures he said that market making volume by ICBC Pakistan in first 11 months amounts to 11 billion, 2.5 times of the volume of last year, showing more and more businessmen are inclined to using RMB when trading with Chinese.

However, compared with the total trade settlement between China-Pakistan, it only accounts for 5$% indicating an enormous space and chances for all businessmen and banking industry.