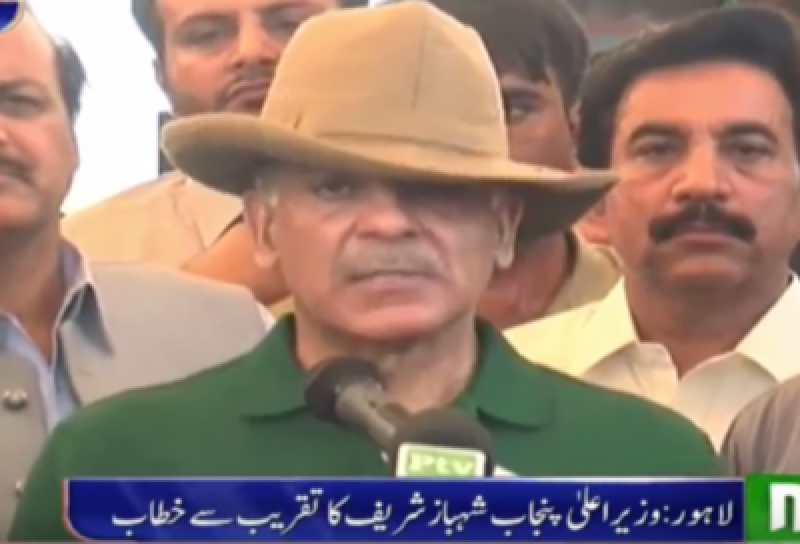 LAHORE (APP): Punjab Chief Minister Muhammad Shehbaz Sharif laid the foundation stone of railway track flyover project in Raiwind on Sunday, which will be completed within six months at a cost of Rs. 1046 million.

Secretary Communication & Works gave a briefing to the Chief Minister regarding important features of the project.

The Chief Minister directed that the flyover project should be completed speedily and with high standard like other projects of Punjab government.

There should be proper arrangement of drainage of water on the flyover and it should be beautified through horticulture, he added.

Shehbaz Sharif said that he will personally monitor the project and concerned officers would be encouraged for their good work.

Talking to media after inaugurating the project, the Chief Minister said that it was longstanding demand of people of Raiwind to make a flyover on railway crossing as they were facing great difficulties and traffic remained jammed.

Shehbaz Sharif said that he had promised to make a flyover here and for honoring his promise, he has laid the foundation stone of the project. Due to agreement with contractors, this project was to be completed in eight months but on his request, now this project will be completed in six months, he added.

He said that this is a splendid project for the people due to which a number of problems will be resolved and pollution reduced.

Shehbaz Sharif said that under the leadership of Prime Minister Muhammad Nawaz Sharif, work is continuing on the projects of progress and prosperity in the country round the clock. He said that Prime Minister is paying full attention to energy projects and personally supervising them.

He said that abundant electricity will be available with the completion of energy projects by the end of next year due to which darkness will be removed and there will be light everywhere in the country.

With the same spirit, the lost status of the country will be restored, he added.

The Chief Minister said that a few days ago, the nation celebrated Independence Day and speeches were delivered on this occasion but he said that the nation will become prosperous only due to practical steps instead of speeches. PML-N leadership believes in hard work and action, he added.

Replying to a question of media, Shehbaz Sharif said that Lahore Orange Line Metro Train project is for the common man and it is the first project in the history of Pakistan which is being constructed on modern lines.

He said that with the completion of this project, three lakh people will travel by metro train daily.

He said that this is the dream envisioned by Quaid and Iqbal and the entire nation had achieved freedom for this purpose that equal opportunities of education, health, justice, progress and prosperity should be available to all in the country.

The Chief Minister said it is not right of elite and the rich to travel by long vehicles and spend their holidays in Europe.

Orange Line project has been started for reducing the gulf increasing between the rich and the poor but opponents do not like respectable, speedy and modern transport facilities for common man, he added.

Therefore, he said that they went to High Court and we are going to file an appeal in Supreme Court.

Shehbaz Sharif said lawyers of opponents, so-called civil society, PTI and lawyers of other parties made propaganda that corruption of billions of rupees has been committed.

Lawyers of opponents also drew the attention a number of times towards it in the high court but even a single word was not said against baseless allegations leveled regarding corruption in the decision, he added.

The Chief Minister said he also challenges today that if corruption of even a single penny is proved against him in development projects including orange line metro train he is ready to face accountability.

Replying to another question, Shehbaz Sharif said that he is deeply grieved over loss of precious human lives due to collapse of roof of a house in the walled city and he has taken its notice and sought a report from the administration.

Answering another question, the Chief Minister said that some political elements are perturbed over the journey of progress and prosperity but Pakistan has not made speedy progress so far like as is making progress in the tenure of present government under the leadership of Prime Minister Muhammad Nawaz Sharif.

PML-N government has set new history with regard to transparency, hard work, honesty and service that is why the opponents are opposing it, he added.

In reply to a question, Shehbaz Sharif said that it is our right to file an appeal against the decision of Orange Line Metro Train Project and our lawyers will tell in Supreme Court how the lawyers of opponents have misled about the project.

The Chief Minister said that today some political elements want to arrange sit in against the journey of honesty, transparency and hard work and their attitude is deplorable.

He said that the policy of leaving those who have usurped billions and trillions of the nation will not be tolerated.

Shehbaz Sharif said that how long the nation will face such serious jokes.

He said that those elements as have committed corruption will have to be held accountable and awarded punishment otherwise transparency will never prevail in the country.

About Bab-e-Pakistan project, the Chief Minister said that this project was launched during the tenure of dictator Musharraf and there was government of Pervaiz Elahi in the province at that time.

He has not decided to start work on this project, Shehbaz Sharif added.