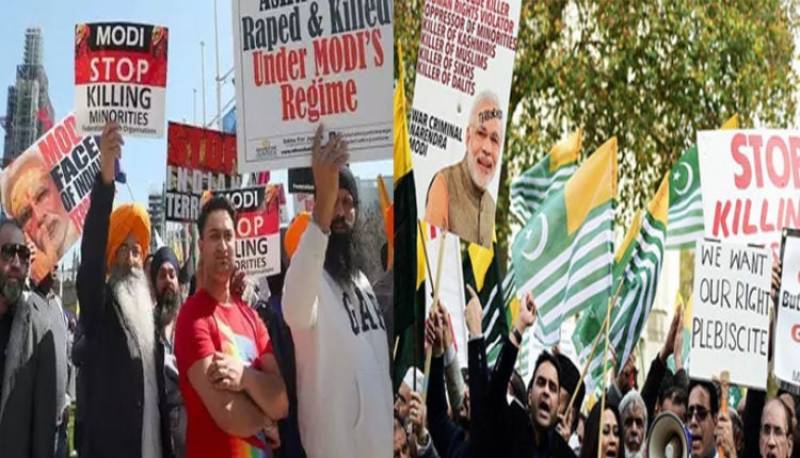 *WASHINGTON - In a big embarassment, **Historic protests by Kashmiris and Khalistanis await Indian PM Narendra Modi in Houston Texas where he is expected to address a big rally of Indian Americans.*

*As per media report, Kashmiris and Khalistanis will hold anti-India protest demonstrations and rallies in Houston, Texas on the occasion of Indian Prime Minister Narendra Modi’s visit.*

Kashmiri and Khalistani activists have already made their presence felt with a dress-rehearsal of tractor-trailer trucks decorated with flags and protest signs, Radio Pakistan reported.

The march which started from Sikh National Centre in Houston culminated at the NRG Centre, the venue of the Indian Prime Minister’s public gathering.

The Indian PM will be visiting the US to attend the 74th session of United Nations General Assembly in New York. He will also participate in a massive gathering of Indian-Americans in Houston on Sunday.

It is pertinent to note that occupied Kashmir is under a continued military siege since August 5 when Narendra Modi-led Indian government repealed the special status of occupied Kashmir and imposed strict clampdown in the territory. Thousands of Indian troops have kept millions of Kashmiris confined to their homes during all these days, as per Kashmir Media Service.