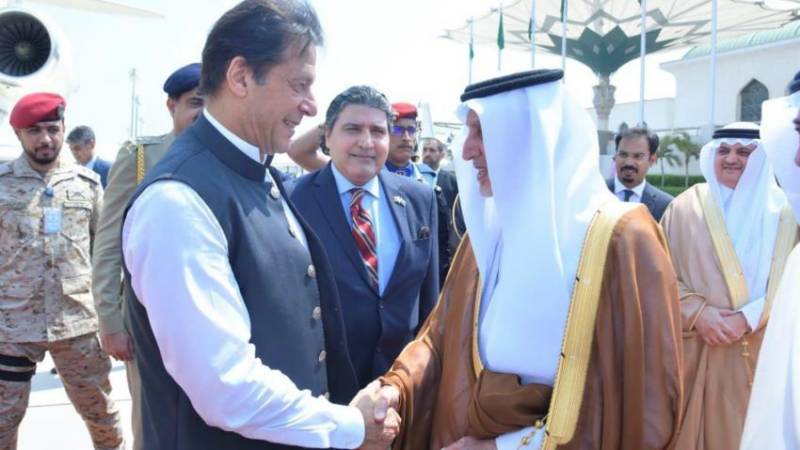 ISLAMABAD - On his way to New York to attend the 74th Session of the United Nations General Assembly (UNGA), Pakistan's Prime Minister Imran Khan stopped over in Jeddah, Saudi Arabia for a two-day official visit yesterday.

As the meeting is taking place at a time when the Saudi oil industry has become vulnerable to destructive drone attacks, it has added significance.

Being an old and trusted strategic ally, Islamabad can be expected to help in mediation as well as suggesting and helping implement internal security measures for the kingdom.

Even though Saudi Arabia has a highly trained military and advanced defence systems, it remains under threat from further drone strikes as it does not have the required deterrence to prevent asymmetrical attacks.

A completely new category of warfare has been initiated and the drone/missile attacks seem to originate from a location farther than Yemen.

Having completed investigations just a day before Khan's arrival, the Saudi defence ministry spokesperson, Colonel Turki al-Malki declared link that, "The attack was launched from the north and unquestionably sponsored by However, while debris from a drone and missile parts were put on display, al-Malki avoided putting direct blame on Iran, instead he explained that it could have such weapons in its possession.

Calling for a UN investigation, the Saudi government wants to de-escalate the matter and it wishes to avoid any major conflict.

Where Pakistan is concerned, PM Khan had assured the Saudi Crown Prince Mohammad bin Salman (MbS) of his implicit support even before his arrival in the kingdom, saying that his country would take "its full stand with all its potentials in confronting link these sabotage acts which threaten the global economy and the kingdom's security."

During his meeting link with MbS, PM Imran Khan has vehemently condemned the Aramco attacks, at the same time he has also "highlighted the tyranny of the Indian government" in Kashmir.

Before the drone strikes took place, the initial purpose of his visit was to muster support for resolving the Kashmir valley crisis. Pursuing this matter, Khan had maintained regular contact link with the Saudi crown prince regarding the situation in the Kashmir valley.

Upsetting the balance between both the countries can complicate matters for Pakistan on the domestic front as some of its population belongs to the Shia sect.

Notwithstanding these limitations, the Pak-Saudi ties have been described as "probably one of the closest relationships in the world between any two countries without any official treaty" by the former head of Saudi intelligence, Prince Turki al-Faisal.

And the bonhomie has only increased, as observed in the Pakistan Foreign Office statement link, "Since the last visit of Mohammad bin Salman in February this year, there has been a growing momentum in Pakistan-Saudi Arabia relations in all areas of cooperation."

Therefore, both the allies can be expected to take some 'quid pro quo' steps on Kashmir as well as the drone attack scenario.

For starters, Pakistan could mediate between Saudi Arabia and Iran as any "all out war link" can be disastrous for the whole region and disrupt Middle Eastern oil trade completely.

Finding a way to avoid confrontation can become even more difficult due to the rhetoric. Adopting a defensive stance, Iranian Foreign Minister Jawad Zarif has said link, "We don't want war, we don't want to engage in a military confrontation, but we wont blink to defend our territory."

Therefore, the first step should be to initiate back-channel negotiations in order to prevent further attacks.

Interestingly, even Pakistan is projected to take a $1.2 billion link hit with every $5 per barrel increase in global oil prices as it Over the years, the Pak-Saudi equation has become "institutionalised link" and evolved into an inter-dependent security relationship, therefore bilateral relations with other countries may not upset their mutual understanding.

Pakistan has been facilitating the Saudi military with training programmes and shared intelligence to combat terrorism. Not only that, Islamabad provides a security guarantee link for the holy sites in Saudi Arabia.

Right now, the developing situation is extremely dangerous and combustible. According to Cinzia Bianco link, a Middle East analyst at the European Council on Foreign Relations, "Inside Saudi Arabia, there is uncertainty over the most appropriate course of action" and she has warned of "an out-of-control chain of escalatory events."

In fact, results of backdoor negotiations can be expected soon and further discussions could be held as the Pakistan Foreign Office spokesman link has said that PM Khan is also expected to "visit Saudi Arabia on his way back to Pakistan after the UNGA [session]."

Meanwhile, Islamabad also needs Riyadh's support for its case on the ongoing Kashmir issue. The disputed region remains under strict curfew ever since New Delhi revoked Article 370, a special clause which gave the valley its UN recognised special status. Imran Khan will be highlighting this matter in UNGA soon, and Pakistan is looking for a decisive resolution of the seven-decade long conflict.

*BY: Sabena Siddiqui is a foreign affairs journalist, lawyer and geopolitical analyst specialising in modern China, the Belt and Road Initiative, Middle East and South Asia. *