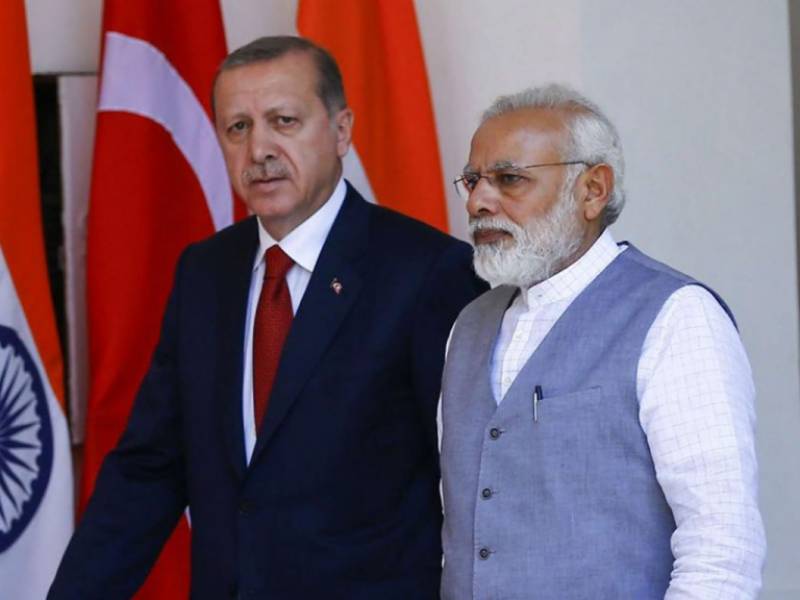 Erdogan raised the Kashmir issue at the United Nations General Assembly (UNGA) and also backed Pakistan at the Financial Action Task Force (FATF) meet in Paris, following which India has decided to give the cold shoulder to Turkey.

After Turkish President's remarks, Indian media reported that Ankara's 45,000-ton fleet support ships (FSS) deal for the Indian Navy, estimated to cost $2.3 billion, was expected to be put on hold.

Modi had last visited Turkey during the G20 Summit in Antalya in 2015. He had held bilateral talks with president Erdogan in Osaka, on the sidelines of the G20 in June this year. The Turkish leader had paid a two-day visit to India in July 2018.

India has deployed thousands of troops after introducing a parliamentary bill to revoke its special status that led to a lockdown in held valley for more than 70 days now.

Situation in Occupied Kashmir took an ugly turn when India withdrew constitutional provisions on August 5 that gave Jammu and Kashmir more autonomy than any other Indian state.

In retaliation to Modi's government's move, India flooded the region with additional troops, and imposed curfew-like restrictions to keep a lid on protests.

Although many curbs, including those on movement have been eased, mobile telephone and internet connections in the Kashmir valley, home to around seven million people, remain cut off.

New Delhi insists that its move in August was essential to integrate Kashmir fully into India and bring development to the Himalayan region, but there is anger and discontent among many locals over the decision.