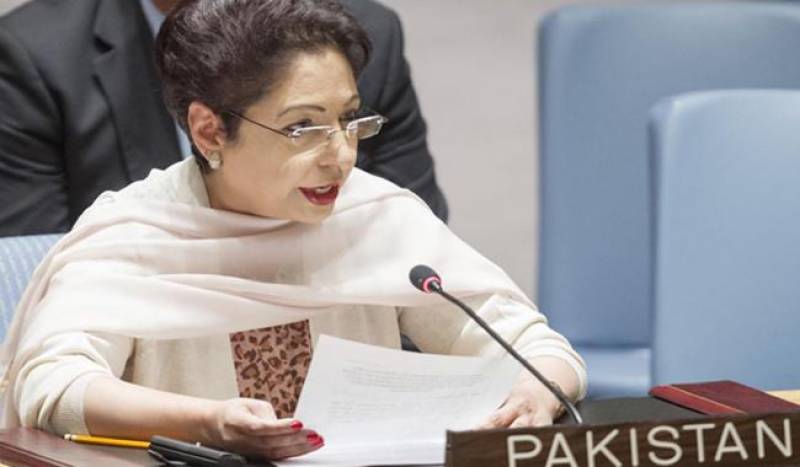 UNITED NATIONS (APP): Pakistan’s Ambassador to the United Nations, Maleeha Lodhi, briefed UN Secretary-General-designate Antonio Guterres on the situation in South Asia and Afghanistan when she called on him on Wednesday, according to informed sources.

Maleeha Lodhi lashes out at Israel in UN Security Council

In her first meeting with Guterres after the General Assembly unanimously elected him as the new UN chief on Oct. 13, Ambassador Lodhi also discussed with him both the opportunities and challenges confronting the world, the sources said, without elaborating.

At the outset, the Pakistani envoy conveyed congratulations to the secretary-general-designate on behalf of Prime Minister Muhammad Nawaz Sharif and the Adviser to the Prime Minister on Foreign Affairs, Sartaj Aziz.

On his part, Guterres expressed his deep admiration for Pakistan's resilience, not just in hosting refugees, but also in confronting the challenges it has faced over the years.

He fondly recalled his various visits to Pakistan and the excellent cooperation that he had received as the United Nations High Commissioner for Refugees, a post he held for 10 years.

As UNHCR, Guterres, who will formally take over as UN secretary-general on January 1, 2017, has visited Pakistan six times.

Guterres, 67, was Prime Minister of Portugal from 1995 to 2002. He entered politics in 1976 in Portugal’s first democratic election after five decades of dictatorship.

He became leader of the Socialist party in 1992 and was elected prime minister in 1995.

Secretary-General Ban Ki-moon, who completes his term at the end of this year, has called Guterres is excellent choice,” noting that the two had worked closely during Guterres “long and outstanding tenure” as the UN High Commissioner for Refugees.

After his appointment by the General Assembly on Oct 13, Guterres pledged to act as an “honest broker” and said he would take a humble approach in trying to deal with global issues, with human dignity at the core of his work.

“Diversity can bring us together, not drive us apart,” Guterres told the General Assembly.

“We must make sure that we are able to break this alliance between all those terrorist groups or violent extremists on one side and the expressions of populism and xenophobia on the other side,” he said. “These two reinforce each other, and we must be able to fight both of them with determination.”