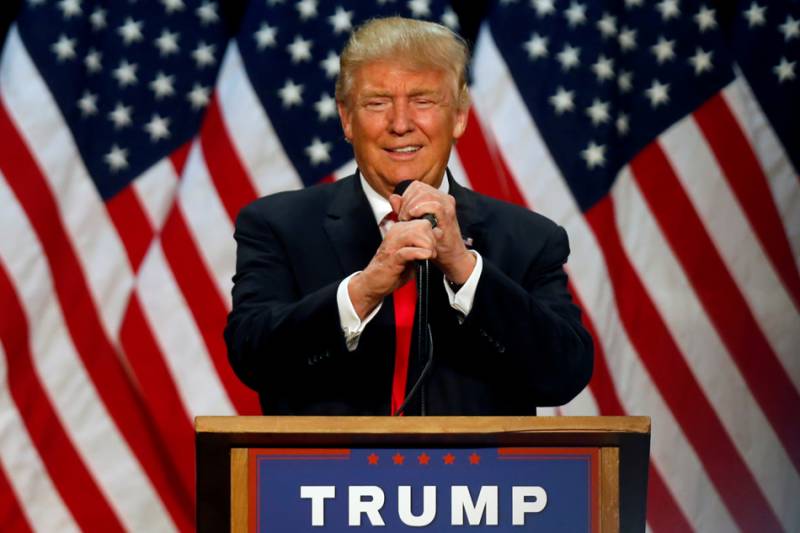 NEW YORK (APP): US President-elect Donald Trump met at his Trump Tower residence in New York last week three Indian business partners, raising fresh questions about a separation between the Trump's business and future work in the White House, according to a report in The New York Times.

The three Indian executives -- Sagar Chordia, Atul Chordia, and Kalpesh Mehta are building a Trump-branded luxury apartment complex south of Mumbai. In a picture posted on Twitter, all four men are smiling and giving a thumbs-up.

The meeting comes as Trump vowed to hand off his business to his three adult children in a blind trust to avoid potential conflicts of interest while serving in the Oval Office.

A spokeswoman for the Trump Organization told the Times that the three Indian real estate executives flew from India to congratulate Trump.

"It was not a formal meeting of any kind," Spokeswoman Breanna Butler said when asked about the meeting on Saturday.

The Times said Butler and Hope Hicks, a spokeswoman for Donald Trump, declined to comment when asked by the Times if the meeting included any discussion of Trump businesses in India or expanding that business.

One of the Indian businessmen, Sagar Chordia, posted photographs on Facebook on Wednesday showing that he also met with two of Trump's children -- Ivanka and Eric. Trump's children are helping to run his businesses as they play a part in the presidential transition.

The three Indian executives have been quoted in Indian newspapers, including The Economic Times, as saying they have discussed expanding their partnership with the Trump Organization now that Trump is president-elect.

The Times said Sagar Chordia did not respond to a request for a telephone interview. But in a series of text messages with the Times early Sunday, he confirmed that the meeting with Trump and members of his family had taken place, and that an article written about it in the Indian newspaper, which reported that one of his partners said they had discussed the desire to expand the deals with the Trump family, was accurate.

Ethics lawyers in Washington, cited by the New York Times, said that a meeting with Indian real estate partners, regardless of what was discussed, raised conflict of interest questions for Trump, who could be perceived as using the presidency to advance his business interests.

"There may be people for whom this looks O.K.," Robert Walker, the former chief counsel of the Senate Ethics Committee, who advises corporations and members of Congress on government ethics issues, was quoted as saying. "But for a large part of the American public, it is not going to be O.K. His role as president-elect should dictate that someone else handles business matters."

In an account of the meeting that appeared in The Economic Times, an Indian newspaper, Trump was quoted as praising the United States' relationship with India and its prime minister, Narendra Modi.

Trump-Modi will be best friends: Advisor to Donald Trump

Internationally, many properties that bear Trump's name are the result of marketing deals "like the one in India" in which he is paid by someone for the use of his name but does not actually own the underlying property, according to the report. He has such marketing agreements in South Korea, the United Arab Emirates, Uruguay, the Philippines and Turkey, according to a list published by his company.