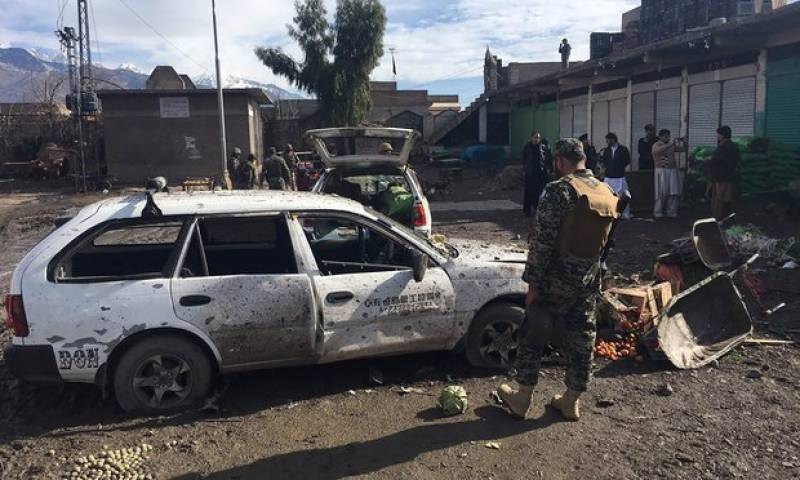 PESHAWAR: (APP) As many as 21 persons including two teenagers were killed and more than 40 other injured when an IED blast planted in a crowdedly vegetable market in Parachinar Baazar, Khurram Agency went off with a big bang on Saturday, officials of the police control and political administration confirmed.

at around 8.50 AM when a large number people were busy in shopping vegetables and suddenly an IED planted in an apple cart went off suddenly with a big bang, killing 14 people on the spot with seven other succumbed to injuries besides 40 other injured among them 13 were in critical condition.

of the 40 injured, 13 were in critical condition and were evocated by the Pakistan Army helicopters to Combined Military Hospital (CMH) Peshawar and Lady Ready Hospital (LRH).

He disclosed that the Parachinar Bazar was completely closed and was given a deserted look with peoples rushed to the Agency Headquarters to search out their love one either dead or injured in the deadly blast. There were also good number of youth who came to hospital for blood donation as well with many took part in the relief and rescue operation.

The market was bustling with people who were out shopping for vegetables.

An emergency has been imposed at DHQ Parachinar. Kurram is one of the most sensitive tribal areas as it borders three Afghan provinces and at one point was one of the key routes for militant movement across the border.

It has witnessed scores of such attacks and kidnappings for ransom incidents in the past several years.

The agency is adjacent to North Waziristan where Operation Zarb-i-Azb is in progress against the Tehreek-i-Taliban and other insurgent groups. Parachinar is the administrative headquarters of the agency near the Afghan border.

There are a total of 7 agencies and most of them border Afghanistan.

Kurram Agency that is landlocked by Afghanistan on three sides is 250 kilometers from Peshawar. The central city of this agency is Parachinar with a population of 500,000 people with Shias being a clear majority.

Bazars and other nearby areas in the vicinity remained in grief and fear on Saturday. Most markets in Parachinar were shut in mourning. A visit to the market and its adjacent residential localities by the APP Correspondent revealed shocking tales of the affected families and traders. Hordes of people kept visiting the blast site and paid a tribute to those who laid down their lives in the tragedy.

A chicken seller nearby the site of the incident, said windowpanes of shops were broken due to blasts that snuffed the light out of many lives.

He too suffered bruises on hands. Many other people talked on this occasion said the blast had disturbed their routine life and landed them in shock and awe.

Law-enforcement agencies launched investigation into the blast by cordoned off the area and started search operation till last reports came in on Saturday.

The political administration confirmed the killing 21 person in the blast and said that more than 40 were injured in the explosion, out of the 40 injured 13 persons were in critical condition.

The Edhi officials also confirmed that the Army Helicopters and Jawan of FC Quick Reaction Force took part in the relief operation soon after reaching at the site of the incident and cordoned off the area with Army helicopters evacuation of the injured.

There were also confirmed that the critical injured were shifted to Lady Ready Hospital (LRH) through Army Helicopters. When contacted, MNA Sajid Hussain Turi claimed that the death toll increased to 21 and only 16 people were identified.

Five other lost their life in the deadly blast including two teenagers were yet to be identified.

The hospital authorities have confirmed that they have received more than 40 injured, wherein 13 of the injured in critical condition. The security forces rushed to blast site while the injured were shifted to agency headquarters hospital Parachinar as well.

Those injured shifted by Pakistan Army Helicopters including Maqbool s/o

Spokesman of the Tehrike Taliban Pakistan (TTP) Umer Khurasani accepted the responsibility for the Parachinar blast. In a message viral on social media the blast carried out in reaction to the arrests of Asif Choto and Muhammad Ishaque by the law enforcers in Pakistan recently.