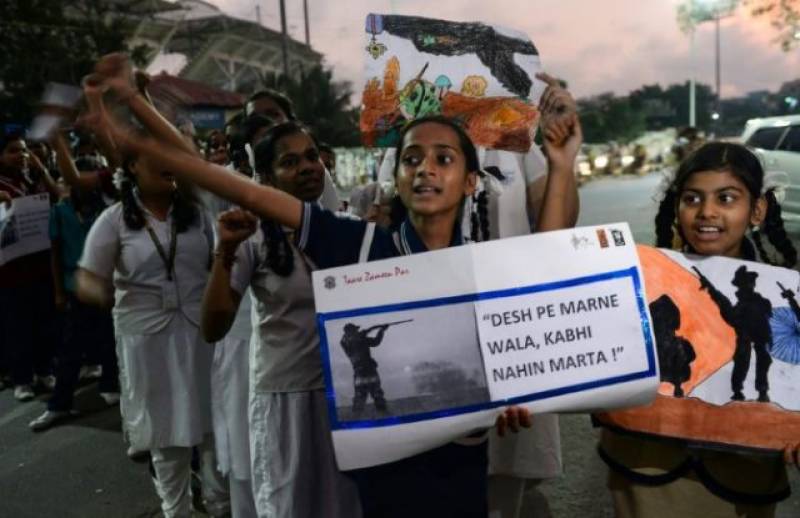 SRINAGAR - Junaid Ayub Rather cowered alongside 30 other students in a small room for two nights while mobs chanted for their blood outside, before finally escaping an angry backlash over a suicide bombing in Kashmir.

Similar scenes have played out across the nation as Kashmiris living away from home flee violent reprisals following the latest attack in the restive Himalayan region, which killed at least 40 Indian paramilitary soldiers.

Rather said angry crowds gathered outside hostels and apartments rented by Kashmiri students in Dehradun, north of New Delhi, shouting for the "traitors" and "terrorists" inside to be shot.

"It took us four days to reach home in Kashmir with some help from police and a Muslim businessman," Rather, who had lived in the northern city for two years, told AFP after reaching his home south of Srinagar.

"Thirty of us slept in one room for two nights before we could mobilise help to flee."

The businessman let them take refuge in his home until buses could be organised to get them to safety.

Around 11,000 Kashmiri students enrol at Indian universities outside their home state each year.

Many are now clamouring to return home to a region battle-scarred by 30 years of brutal armed insurgency, fearing violent attacks if they stay.

Video footage of Kashmiris being beaten and taunted in Indian cities has been widely shared on social media, while rightwing Hindu groups and pundits on TV news channels have encouraged reprisals.

A professor from New Delhi's Jawaharlal Nehru University this week publicly called for the execution of 40 Kashmiris to avenge the suicide bombing, while two other colleges announced they would no longer accept students from the territory.

More than 500 students, along with 100 businessmen, have already arrived back in Kashmir to flee a "climate of fear and intimidation across India", said Kashmir Traders and Manufacturers Federation chief Mohammad Yasin Khan.

More were on their way, he told AFP.

"We are continuously receiving distress calls from all kinds of people asking for help," Khan said.

Some Kashmiri students have also been suspended by Indian universities for allegedly posting insensitive comments on social media about the suicide attack, while others have been arrested on sedition charges.

More than 500,000 Indian troops are stationed in Kashmir, a territory administered by New Delhi but also claimed by neighbouring Pakistan.

The two countries have battled three wars for control of the region, while an assortment of local insurgent groups have fought for a merger with Pakistan or outright independence.

Last week's suicide attack was claimed by the Jaish-e-Mohammad (JeM) militant group, based in Pakistan.

Prime Minister Narendra Modi, who faces an election in the coming months and is under pressure to take a tough stand on militants, has promised those responsible for the bombing "will pay a heavy price".

His Pakistani counterpart Imran Khan promised retaliation against any Indian attack on his country's soil. - APP/AFP