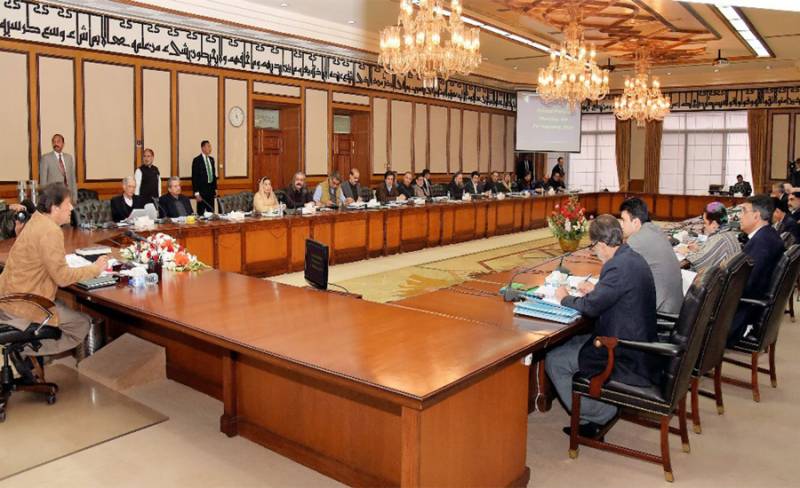 *ISLAMABAD – Prime Minister Imran Khan on Thursday presided over a meeting of the federal cabinet to discuss the 13-point agenda at Prime Minister’s Office.*

The cabinet exchanged views about the Saudi crown prince’s visit. The forum also rejected the Indian propaganda over the Pulwama incident. It also endorsed the decisions made during a meeting of the National Security Committee

The cabinet was informed that Prime Minister’s office has taken lead in cutting down its expenditure by 31% during the current financial year, resulting in savings of Rs 303 million.

The savings have been made under various heads including pay and allowances, food expenses, motor vehicle fuel and cash rewards. The prime minister, while reiterating his call for maximum possible cut in expenditure, urged all the ministers to ensure that the government’s austerity drive is implemented in letter and spirit.

It was decided that in future a panel of suitable officers for posting against the slot of secretary of a ministry would be proposed by a high-level committee, to be headed by the Advisor to Prime Minister on Establishment and having Minister for Education Shafqat Mehmood, the concerned Minister-in-Charge, Secretary Establishment and Secretary to Prime Minister as its members.

The cabinet granted ex-post facto approval of MOU on industrial cooperation between National Development and Reform Commission of China and Federal Board of Investment of Islamic Republic of Pakistan. The cabinet ratified the decision taken by the Cabinet Committee on State Owned Enterprises (CCoSOEs) in its meeting held on 02-01-2019.

The cabinet ratified Visa Abolition Agreement between Islamic Republic of Pakistan and the Republic of Cyprus for Diplomatic and Official/Service Passport Holders. The cabinet approved appointment of Raja Amer Khan as Chairman, Implementation Tribunal for Newspaper Employees (ITNE). The cabinet approved appointment of Justice Shahid Karim as Judge of the Special Court and Justice Tahira Safdar as President of the Special Court, constituted under Criminal Law Amendment (Special Court) Act, 1976 (Act XVII of 1976).

The cabinet also approved composition of Steering Committee for Sustainable Development Goals Achievement Programme (SAP). The cabinet approved Memorandum of Understanding between Government of Pakistan and China Overseas Ports Holdings Company Limited under Clean Green Pakistan Movement (CGP-M). The cabinet also approved revision of visa-fee for various countries under visa liberalization regime. The prime minister during the meeting directed a nation-wide campaign be formulated to launch crackdown against the sale of adulterated milk.