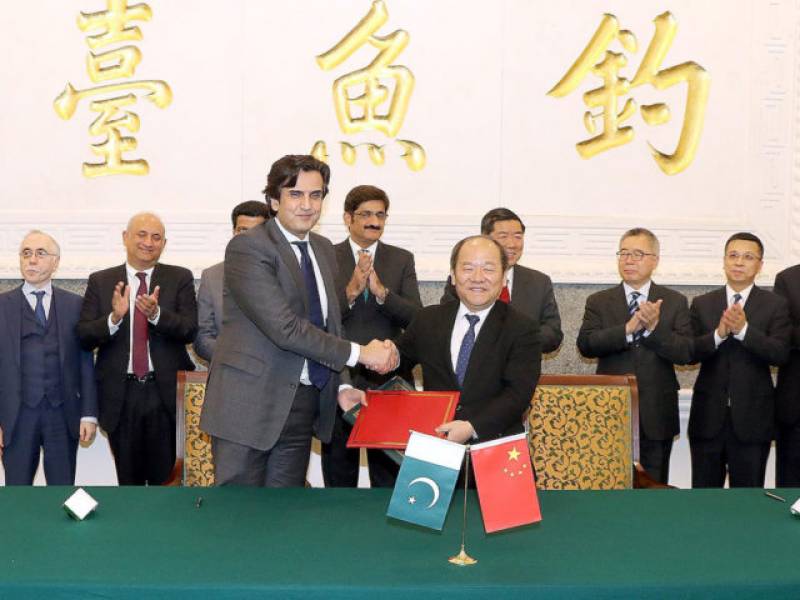 BEIJING: Minister of Planning, Development and Reform, Makhdum Khusro Bakhtyar Thursday said that the leadership of Pakistan and China had decided that the scope of the China-Pakistan Economic Corridor (CPEC) needed to be broadened.

“In the Joint Coordination Committee (JCC), we have already expanded the scope of CPEC by adding another dimension of social economic development joint working group that will come a long way in addressing the social economic development needs of people of Pakistan, especially in the areas which are marginally less developed, and will address poverty,” he told China Global Television Network (CGTN) in an interview.

He said the issue of poverty alleviation in Pakistan was the focus of the present government, adding, “No country in history has lifted so many people out of poverty than what China has exhibited in the last few decades.”

To a question about open up of the CPEC to other countries, he said there was a couple of projects which could attract trilateral or collateral investments with different countries, or two or three different parties and it became a shared benefit for other countries to come and seek out of the CPEC.

“We are looking at potential projects which can be offered (through) third country partnership,” he added.

The minister said the potential of CPEC to be fully harnessed was that it needed the whole connectivity all the way not just from north to south but to connect the CPEC routes, the BRI routes going from east to west.

“In the long-term framework of BRI, whilst this connectivity is put together, this is a potential for that economic synergy to be created. The potential in the long term is huge. And it’s win-win for all the countries and all the economies in the region,” he added.

Regarding the progress on the projects and the future trajectory of cooperation to realize CPEC’s full potential, he said the early-harvest projects under CPEC were going as per timelines and added, “We have seen considerable success, especially in the energy sector.”

The minister emphasized that four or five years ago there was a gap between the demand for energy in Pakistan and the supply of energy.

Under the CPEC, one of the dividends that came to Pakistan was the energy demand of Pakistan is fulfilled and the generation capacity meet the demand and the need which was industrial needs.

“Energy is one basic ingredient for any economy to grow. That’s a dividend which we see happening in Pakistan and there are a lot of projects in the pipeline under the early harvest in the energy sector, which will also be taken up in coming years,” he added.

About the challenges faced by the CPEC, he said because of the geopolitical situation and the politics at play, there were a lot of detractors of BRI and CPEC.

“We are very clear that CPEC is putting the platform for our economic growth. It’s an investment in the much-needed infrastructure upgrading. Those are the foundation on which a country of 200 million people and an economy which can grow and achieve the potential which can only be harnessed through such an investment,” he added.

He said the portion of the government-to-government loan on the CPEC was six billion, which had gone into infrastructure development. Today Pakistan’s total external debt was around 94 or 95 billion. “So that’s a very small portion of our external debt liabilities.”

The minister said in policy making among the political parties in Pakistan, in terms of academics and business community, there was a broad base consensus that CPEC was a true instrument – if well-planned and executed, could really benefit and multiply Pakistan’s economic growth.

Khusro Bakhtyar said security of the Chinese personnel working on CPEC projects was a priority for the government.

He said in recent past the cowardly attempt on the consulate in Karachi was done by the same forces which did not want to see the progress of BRI and CPEC but law enforcement agencies foiled that.

“The very next day, I went to the Chinese embassy. The Chinese ambassador and I further resolved that such cowardly attempts only strengthen our resolve to take CPEC to further heights,” he added.