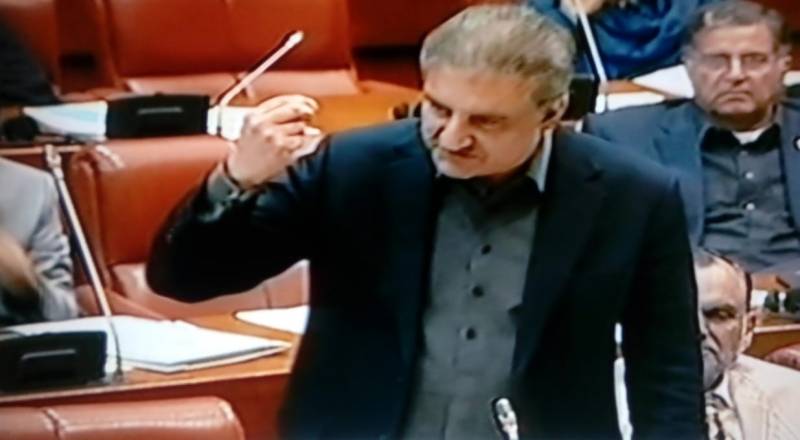 Foreign Minister Shah Mehmood Qureshi says dialogue is the only option to resolve all outstanding issues between India and Pakistan.

Responding to a call attention notice in Senate, the Minister said the Prime Minister immediately after assuming power offered India to come to dialogue table in order to remove illiteracy and poverty from the region. He said Pakistan needs peace at both eastern and western fronts.

Referring to the cancelled meeting between foreign ministers of both counties on the sidelines of UN General Assembly session in New York earlier this year, he said India had initially agreed on the meeting but later backtracked due to domestic political compulsions. He said India had in mind elections in six states of the Union and general elections next year.

Foreign Minister said our response was very measured and mature in which we said Pakistan is willing to engage when they are ready as engagement is the only solution to our bilateral outstanding issues.

Shah Mehmood Qureshi said two neighbors, that are also nuclear powers, have been acknowledging of their bilateral issues since the last many decades. Dialogues were also held in the past and these were stalled due to various reasons.

Regarding the opening of Kartarpur Corridor, he said the gesture by Pakistan was made for peace and completing the long-standing demand of Sikh community to visit one their holiest places.

Foreign Minister said a stable and peaceful neighborhood is our requirement in order to improve our socio-economic conditions. He said India must realize the high price Pakistan has paid in fighting the war against terror. He said no other nation has sacrificed 75,000 people in this war, besides suffering losses of billions of rupees. He said all credit goes to people and armed forces of Pakistan who have exhibited their resilience.

The House was informed today that government of Pakistan is regularly in touch with Afghan government for access to information regarding Pakistani prisoners in Afghanistan and their repatriation to Pakistan.

Foreign Minister Shah Mehmood Qureshi in a written response during the Question Hour said the government has raised this issue as one of the agenda points of all bilateral engagements with Afghanistan.

He said during the inaugural session of Afghanistan Pakistan Action Plan for Peace held in Kabul in July this year, the issue was discussed during talks with Afghan Deputy Foreign Minister. Pakistan embassy in Kabul has arranged repatriation of seventeen Pakistani prisoners released from Afghan jails from 20th February to 30th August this year. From the period August 20th to this month, four Pakistani prisoners were released and repatriated to Pakistan.

The Minister said Afghan government arranged a guided tour for Pakistan embassy officials in Bagram Detention Centre earlier this year, in which Afghan authorities claimed that around 200 inmates were Pakistani nationals. However, no individual interaction was allowed to ascertain the charges and terms of sentences handed down to them.

The Foreign Minister said the government is also working on an MoU for transfer of offenders and it will be shared with the Afghan side for signatures upon completion.

On another question, Shah Mehmood Qureshi informed that the number of Pakistanis executed in Saudi Arabia on account of drug smuggling during the last five years is 62. He said one thousand seven hundred and sixty four Pakistani prisoners are in Saudi jails on charges of drug trafficking.

The minister said a coordination office exists in Saudi embassy in Islamabad for formal liaison with anti-narcotics authorities in Pakistan.

Senator Hasil Khan Bizenjo presented a privileged motion in the House that reports are appearing in media that National Accountability Bureau is preparing to take action against him for allegedly having purchased properties worth billions of rupees. The senator said this is tantamount to a media trial.

The House adopted a motion for giving authority to Senate Chairman for nomination of six senators for Public Accounts Committee of the Upper House.

The Chair referred the matter to the Standing Committee concerned.