India should respect desires of Kashmiris instead of election drama: Gilani
21 Apr, 2017 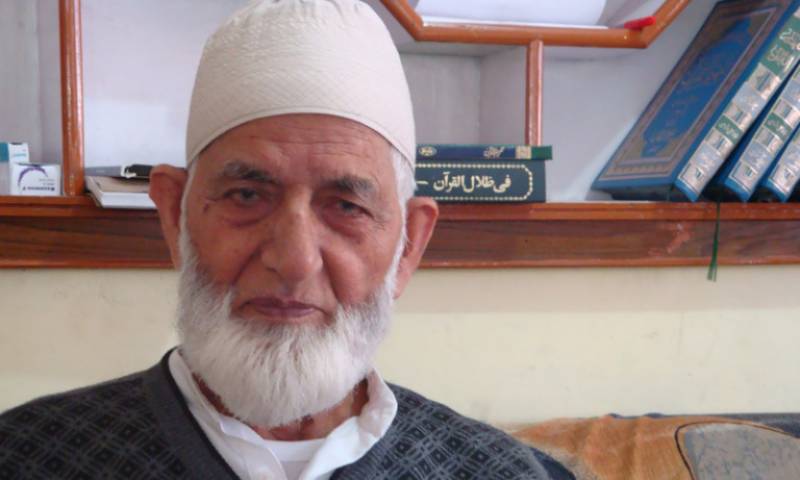 ISLAMABAD: The Chairman of All Parties Hurriyet Conference, Syed Ali Gilani in Indian occupied Kashmir, expressing deep grief over the death of Muzaffar Ahmad of Kulgam.

According to Kashmir Media Service, he said that instead of staging election drama Indian authorities should respect the aspirations of people and resolve the Kashmir dispute.

Muzaffar Ahmad was injured in Ganderbal on April 9 after Indian forces opened fire on peaceful demonstrators who were protesting against the holding of sham Indian parliamentary by-elections on that day. He succumbed to his injuries at SMHS hospital in Srinagar on Wednesday.

Syed Ali Gilani in a statement in Srinagar urged the puppet authorities to cancel the forthcoming so-called by-elections in Islamabad constituency as there were apprehensions of escalations in terrifying incidents in the Kashmir Valley. He said that the authorities must make an end to incessant bloodshed and instead seek people's mandate with respect to political destiny of Jammu and Kashmir through referendum. Referendum is the best and only choice to ascertain people's mandate in a democratic manner, he stated.

The APHC Chairman extended his condolence to the bereaved family of Muzaffar Ahmad. He said that guarantee and dignity of life in the occupied territory was at stake and Indian forces were brutally massacring Kashmiri young generation. During last 27 years, thousands have been martyred and even now authorities are following the same dogma as their thirst for blood is yet to be quenched, he said.

"Youth feel dejected and do or die like situation is evolving due to stubborn attitude of Indian authorities. Their fight is genuine and they are refuting the colonial and unconvincing mindset of Indian authorities," he added. People in Kashmir are peace loving and believe in mutual harmony and brotherhood, however instead of addressing their issues, Indian authorities are resorting to brute force against them, he deplored.

Syed Ali Gilani pointed out that India has failed to suppress the Kashmiris' freedom sentiments and the authorities in Delhi feel frustrated and are planning more bloodshed on large scale. "They can't justify their forced occupation as people's uprising in 2016 proved that freedom movement is in its final and crucial stage. Moreover, the recent election boycott by people proved that no power on earth can break our resolve," he added.

Meanwhile, the APHC in a statement expressed its anguish over the misappropriation and misuse of Wakaf funds and said that its assets and sources were being utilized by ruling parties for staging election drama and for their personnel gains. (APP)