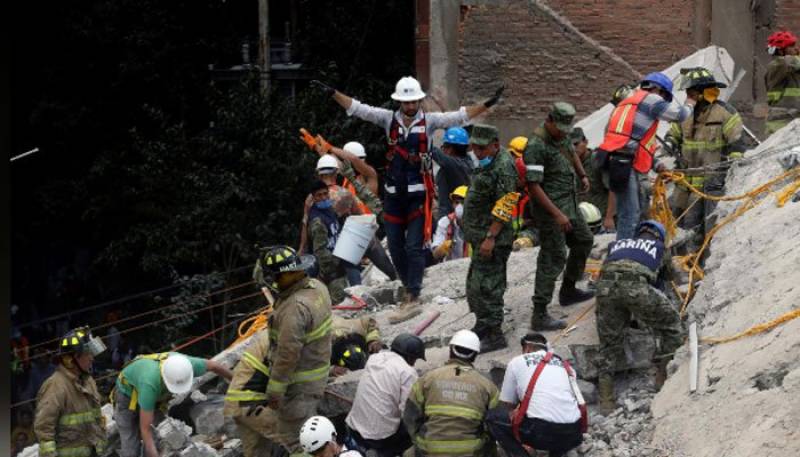 MEXICO CITY: Rescue crews and ordinary citizens searched through rubble for survivors as night fell on Tuesday on battered cities in central Mexico, including the capital, where the death toll from a major earthquake grew to at least 226.

The magnitude 7.1 quake toppled dozens of buildings, broke gas mains and sparked fires less than two weeks after another powerful quake killed at least 98 people in southern Mexico. It also hit just hours after emergency drills marked the anniversary of a temblor that killed thousands in 1985.

Millions of people fled into the streets, where they weathered the violent shaking and desperately sought word about the welfare of family and friends.

Mexican President Enrique Peña Nieto said late on Tuesday more than 20 children and two adults had been found dead at the school, Colegio Enrique Rebsamen, in the neighborhood of Coapa. Another 30 children and 12 adults were missing, he said.

Emergency personnel and equipment were being deployed across affected areas so that “throughout the night we can continue aiding the population and eventually find people beneath the rubble,” Peña Nieto said in a video posted on Facebook earlier on Tuesday evening.

Rescue workers and soldiers toiled around collapsed buildings where heat-sensing equipment suggested survivors could still be trapped. Bystanders joined in where they could, clearing debris with their bare hands or whatever tools they could find nearby.

“My wife is there,” said Juan Jesus Garcia, 33, choking back tears outside one building in Mexico City.

“I haven’t been able to communicate with her. She is not answering, and now they are telling us we have to turn off our cellphones because there is a gas leak.”

The quake had killed 49 people in the capital by late Tuesday, according to civil defense chief Luis Felipe Puente. The highest toll, he said, was in Morelos State, just to the south, where 55 people were killed.

Another 13 people were reported killed in the neighboring states of Mexico and Guerrero. Thirty-two deaths had been counted in the central state of Puebla, also to the south, where the US Geological Survey (USGS) located the quake’s epicenter.

As many as 4.6 million homes, businesses and other facilities had lost electricity, according to national power company Comisión Federal de Electricidad. Most of them were in the greater Mexico City area and in the states of Guerrero, Morelos, Puebla, Oaxaca, and Tlaxcala.