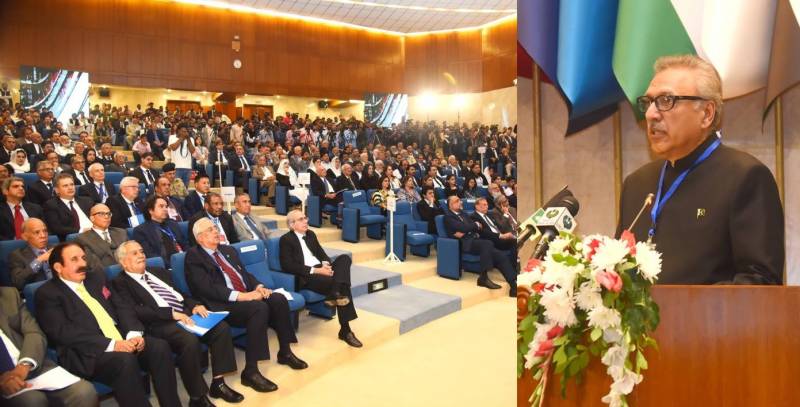 President Arif Alvi has underlined the need for construction of large water reservoirs and better management and conservation of water resources to cope with the current water crisis.

Addressing a two-day international symposium on 'Creating a Water Secure Pakistan' in Islamabad on Friday afternoon, he said nature has been very kind to us providing all sorts of natural resources, including water but over the years increasing population and lack of building more water reservoirs led to strong pressure on existing resources of water.

He said the water scarcity could lead to a situation of conflicts between provinces and between the countries.

The President said 2 million drought-hit residents of Cholistan amplify the magnitude of this problem.

He said situation in Tharparkar is a case in point as adequate water measures were not adopted for the growing needs of people.

He said Pakistan has a vast potential of hydel power generation and according to NEPRA Pakistan could generate 40,000 MW of power.

The President said launch of clean and green Pakistan as well as ten billion trees Tsunami. Programmes are right steps in conservation of natural resources.

Besides water the water conservation steps, the President said water pricing mechanism needs to be revised for better consumption and stopping the wastage of this important commodity.

Alvi said agriculture methods also need to be improved BY introducing drip irrigation system. The President said water conservation techniques should be made part of school curriculum so that children learn the conservation from an early age.

Referring to Indus Water Treaty, the President said this agreement does not address the issue of reduction in Pakistan's share of water, as India is illegally using Pakistani water. He said negotiations with India on Indus Water Treaty are essential.

The President said steps are being taken for desalination of water to meet the growing demands of Karachi population.

Dr Arif Alvi appreciated the initiative of Chief Justice of Pakistan for raising the issue of water shortage and establishing a fund for this purpose.

He said 6.4 billion rupees have been accumulated in the fund till 17th of this month and the people from Pakistan and overseas showed enthusiastic response for this national cause.

Addressing the symposium, Chief Justice of Pakistan Mian Saqib Nisar said water is life and arduous efforts are needed to save the country from becoming water scarce.

He said water is what life is made for and humans can live without food, but cannot survive without water.

The Chief Justice said unfortunately no dedicated efforts were made during the past 40 years to construct dams and water reservoirs in the country.

He said water reserves in Pakistan have decreased to an alarming level and if drastic measures are not taken now, Pakistan could run dry by 2025.

Justice Saqib Nisar said judiciary cannot remain oblivious to this issue as it has the obligation to protect the rights of ordinary citizens.

He said we took this issue and passed judgment, urging the executive to play its role for construction of Diamer Bhasha dam.

He said the dam fund was created while keeping in mind that country has not much capital to construct large dams and there was an overwhelming response from the public and even children and pensioners made contributions in this fund.

The Chief Justice said the sensitization of this issue at the national level has made the nation realized the importance of water conservation and management and even in ordinary day life, people have started thinking of not to waste this precious source of life.

Addressing the conference, Chairman WAPDA Muzammil Hussain said that we are poised to start construction work on Diamer Basha and Mohmand Dam.

He said that the intervention of the Chief Justice of Pakistan for construction of dams is a turning point in our history and we are entering an era of progress and stability.

The Chairman WAPDA also gave an overview of the hydel power projects completed most recently saying the country has a great potential of generating hydel electricity.

The Chairman WAPDA said the Indian side is constructing dams on our rivers in clear violations of Indus Water Treaty.

He said our storage capacity is also reducing due to sediment in Tarbela and Mangla dams.