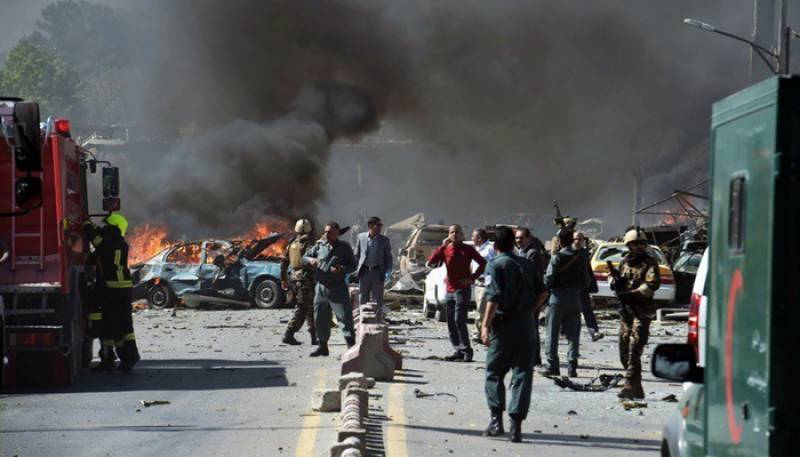 KABUL - Multiple explosions rocked polling centres across Kabul on Saturday, causing dozens of casualties, amid growing anger among voters as they waited hours to cast their ballots in long-delayed legislative elections.

At least 30 people have been taken to a trauma hospital run by the Italian NGO Emergency, including a dead child, the organisation said on Twitter, hours after the Taliban warned voters to boycott the ballot "to protect their lives".

Afghan officials confirmed there have been casualties but would not provide a number.

An AFP correspondent saw voters fleeing a polling centre in the north of the Afghan capital following a blast that a witness said had caused a number of casualties.

Deadly violence has marred the shambolic preparations for the parliamentary election that is more than three years late, with hundreds killed or wounded.

The latest bombings are likely to scare off voters, hurting turn out and the credibility of the election.

Missing voter registration lists and hiccups with biometric voter verification devices -- which are being used for the first time -- already have caused lengthy delays at polling centres across the country, voters and candidates complained.

Most polling centres opened late after teachers employed to handle the voting process failed to show up on time, said the Independent Election Commission (IEC), which has promised to extend voting hours.

"I came here early to finish and go home quickly, but we have been waiting for an hour and they have not started yet," Mustafa, 42, told AFP outside a mosque in Kabul.

"The queue is getting longer. They have to register our votes quickly -- we are afraid a bomber or a blast may hit us."

"I have been waiting for two and a half hours and the IEC officials say they have not received the voter (registration) list yet," said Mohammad Mohaqiq, a deputy to Afghan Chief Executive Abdullah Abdullah.

Abdullah -- Afghanistan´s equivalent of prime minister -- also waited for around half an hour at a polling centre as election workers searched for his name on a list.

Almost nine million people have registered to vote in the parliamentary election, which is more than three years late.

The killing of a powerful police chief in a highly secure compound in the southern province of Kandahar on Thursday has eroded confidence in the ability of security forces to protect polling locations.

Voting in Kandahar has been delayed by a week following the attack, which killed three people, including General Abdul Raziq.

As voting got under way Saturday, three rockets were fired into the northern city of Kunduz, a police spokesman said. No casualties were reported.

There also were numerous reports of bomb explosions near polling stations in several provinces.

Despite the risks, President Ashraf Ghani urged "every Aghan, young and old, women and men" to exercise their right to vote, after casting his ballot in Kabul.

Photos posted on social media showed scores of men and women clutching their identification documents purportedly lining up outside voting centres across the country amid a heavy security presence.

A woman dressed in a burqa leaving a polling centre in the northern city of Mazar-i-Sharif told AFP she had been worried about "security incidents", but decided to vote anyway.

"We have to defy the violence," Hafiza, 57, said. "In previous years we were not happy with the elections, our votes were sold out."

The IEC, which has been skewered over the chaotic lead-up to the ballot, on Friday urged Afghans to "vote only once" and called on others not to interfere in the process. - APP/AFP