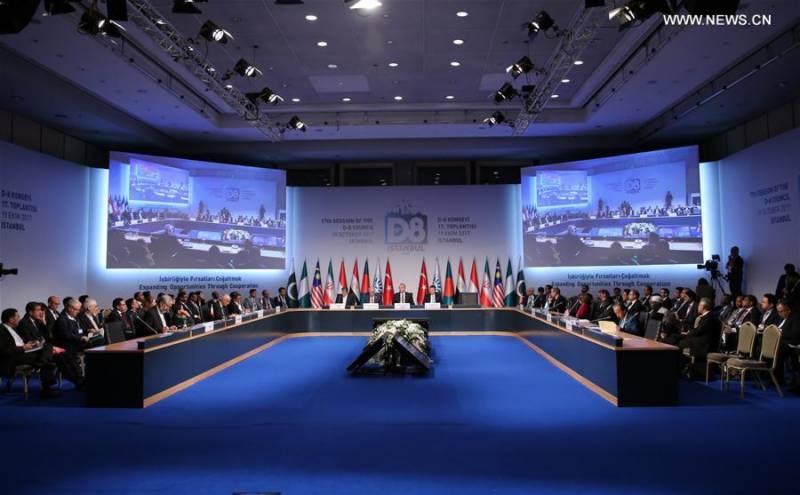 ISTANBUL: Top envoys from the Developing 8 countries met in Istanbul on Thursday on ways to boost trade relations in a wide range of areas to better address global challenges.

"We need to use our wealthy potentials more effectively by creating business partnerships in a broad range of fields," Turkish Foreign Minister Mevlut Cavusoglu said at the opening session.

He stressed that cooperation among member states, namely Bangladesh, Egypt, Indonesia, Iran, Malaysia, Nigeria, Pakistan and Turkey, has become particularly important at a time when they are facing many global challenges such as poverty, racism, migration and drought.

The D-8 countries, representing around 15 percent of the world's population, boast rich natural and human resources as well as huge potentials, the top Turkish envoy said.

He called for boosted cooperation on energy to improve the potentials of member states and more active use of business alliances in other fields like agriculture, industry, environment, information and transportation to better cope with the threats.

Pakistani Foreign Minister Khawaja Muhammad Asif believed that collective efforts by D-8 nations will enable the organization to achieve its goals sooner rather than later, saying the group has achieved significant milestones, including an accord on the simplification of visa procedures for business and a customs agreement.

"When implemented by all members, these agreements will help to boost trade among the member states," he said.

D-8, which was formed in 1997, is an organization for development cooperation among member states. A summit is slated for Friday to mark the 20th anniversary of its inception.