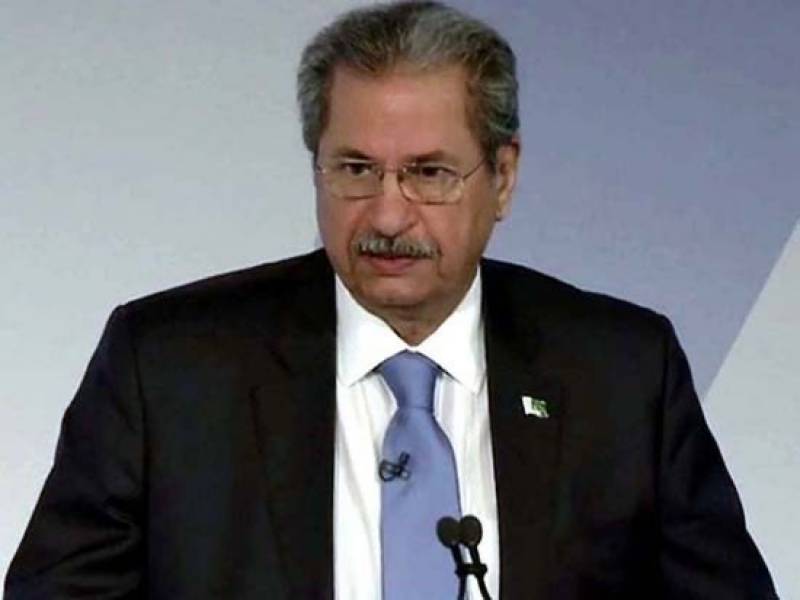 ISLAMABAD :Minister for Federal Education and Professional Training Shafqat Mahmood on Wednesday announced Civil Servants (E&D) Rules-2020 in order to boost the performance of bureaucracy and state institutions across the country.

Shafqat Mahmood, who is also heading the Cabinet Committee on Institutional Reforms, addressing a press conference said that besides improving the economic condition, the government had also brought reforms in the civil services. Considering the importance of the matter, Prime Minister’s Office had been directly involved in the process, as it was top priority of the government, he added.

He said that Prime Minister Imran Khan had approved these Civil Servants (E&D) Rules-2020 in the cabinet meeting held on Tuesday under government’s policy of institutional reforms.

These reforms had been introduced to improve performance of bureaucracy and state institutions, he added.

These rules would ensure transparent and effective internal accountability of bureaucrats and bring efficiency and discipline in their service.

Under the new rules, inquiry against government officials will have to be decided within around 105 days. 14 days for submission of response, 60 days to inquiry committee and 30 days to authority to decide the case.

Earlier, no time frame was fixed to conclude the proceedings as a result of which cases lingered on for years. Opportunity of personal hearing would also be provided by the authority/hearing officer, he added.

For the first time, plea bargain and voluntary return have been included in the definition of misconduct and the civil servants involved in them shall now be proceeded against.

One of the main features of the rules is that in case of inquiry, the case will be heard by the ‘authority, ‘inquiry officer’ or a ‘committee’ instead of any ‘authorised officer’ who was assigned to decide the issue.

He said earlier it had been seen that whenever an officer (but not the authority) was assigned to hold inquiry, he usually disposed of the matter either by awarding minor punishment or under some influence or pressure. He could also decide the case in whatever time he deemed appropriate. However, the authority will now have to decide the case in 30 days.

According to the new rules, in case of Pakistan Administration Service and Police Service of Pakistan officers posted in provinces, a two-month timeline has been provided to the chief secretary to submit fact-finding report, failing which the Establishment Division can proceed on its own.

In order to expedite the inquiry process, the tier of authorised officer has been eliminated, leaving only two tiers — the authority and inquiry officer/committee.

Timelines have been introduced at every step of the proceedings. The procedural issues relating to provision of record, slackness on part of departmental representatives, suspension and proceedings against officers on deputation/ leave/scholarship have been clearly provided in the new rules.

The rules further state that the Establishment Division has been authorised to issue subsidiary instructions to avoid any delay in finalising the inquiries.

Describing the silent features of civil servants promotion, Shafqat said that the powers of the appointing authority have been categorically defined. If the inquiry, investigation or reference was pending in NAB, FIA etc. against any officer, will result in deferment of promotion. Promotion can now be recommended in cases related to sub-judice seniority and disciplinary or criminal cases pending for more tghan three years.

He said that revised weightages have been notified which included PERs 40 percent, training 30 percent and evaluation by boards 30 percent.

To ensure transparency, reasons for deferment/supersession will be conveyed to concerned officers.

For retirement from service, the composition of retirement boards/committee have been finalized including Chairman FPSC from BS-20 and above, Secretary from BS-17 to BS-19, Seniour JS from BS-16 and below.

The grounds for directory retirement include adverse remarks in 03 Performance Evaluation Reports (PERs) or 03 average PERs, and twice superseded.