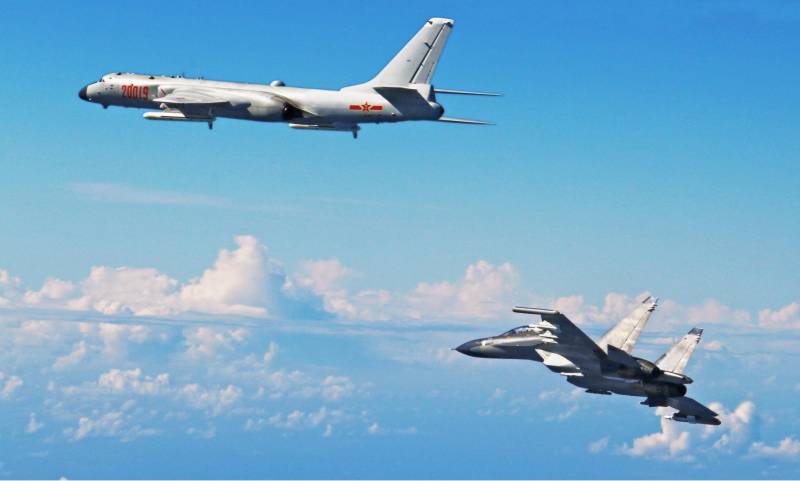 *BEIJING:* Chinese aircraft have again flown around self-ruled Taiwan in what China’s air force on Thursday called a “sacred mission”.

Taiwan, claimed by Beijing as Chinese territory, is one of China’s most sensitive issues and a potential military flashpoint. China has ramped up military exercises around Taiwan in the past year, including flying bombers and other military aircraft around the island.

More recently, China has been incensed by comments by Taiwan Premier William Lai that it deemed were in support of Taiwan independence, though Taipei says Lai’s position remains that the status quo between Taiwan and the mainland should be maintained.

In a statement on its microblog, the Chinese air force said H-6K bombers had “recently” flown a patrol around Taiwan.

“The motherland is in our hearts, and the jewelled island is in the bosom of the motherland,” an H-6K captain, Zhai Peisong, was quoted as saying in the statement, using another name for Taiwan.

“Defending the beautiful rivers and mountains of the motherland is the sacred mission of air force pilots.”

Taiwan’s Defence Ministry said two Chinese H-6K bombers had flown around the island on Wednesday afternoon, passing first through the Miyako Strait, to Taiwan’s northeast, then back to base via the Bashi Channel between Taiwan and the Philippines.

Late on Wednesday, Chinese state media said the military had also conducted live-fire military drills with helicopters along its southeast coast after increasingly stern warnings by Beijing for Taiwan to toe the line, though the exercises were more low key than had been flagged in state media.

China’s Taiwan Affairs Office said the island’s “independence separatist activities” were the biggest threat to peace and stability in the Taiwan Strait.

“No force and no person should underestimate our resolute resolve and strong ability to defend the nation’s sovereignty and territorial integrity,” the office said.

China had said the live-fire drills would happen on Wednesday off the city of Quanzhou, in between two groups of islands close to China’s coast but which Taiwan has controlled since 1949, when defeated Nationalist forces fled to the island at the end of the Chinese civil war.

Chinese state media has said the drills were a direct response to “provocations” by Taiwan leaders related to what China fears are moves by the island to push for formal independence.

The latest Chinese military movements come during a time of heightened tension between Beijing and the island and follows strong warnings by Chinese President Xi Jinping against any Taiwan separatism last month.

China’s hostility towards Taiwan has grown since Tsai Ing-wen from the pro-independence Democratic Progressive Party won a presidential election on the island in 2016.

China fears she wants to push for independence. Tsai says she is committed to peace and maintaining the status quo across the Taiwan Strait, but will defend Taiwan’s security.

Setting aside the tension with China, Tsai began a visit to the southern African nation of Swaziland on Wednesday, one of only 20 countries which maintain formal diplomatic ties with Taiwan. - Agencies