ISLAMABAD: A ring of steel was placed around the Supreme Court Thursday ahead of a ruling on corruption allegations that could see the prime minister ousted from power after the Panama Papers linked his family to offshore businesses.

Around 1,500 police commandos and riot forces have been deployed around the court in Islamabad ahead of the highly-anticipated decision, expected in the afternoon. Dozens of baton-wielding police were also seen along some roads leading into the capital.

Over a dozen terrorists killed in IBOs across Pakistan 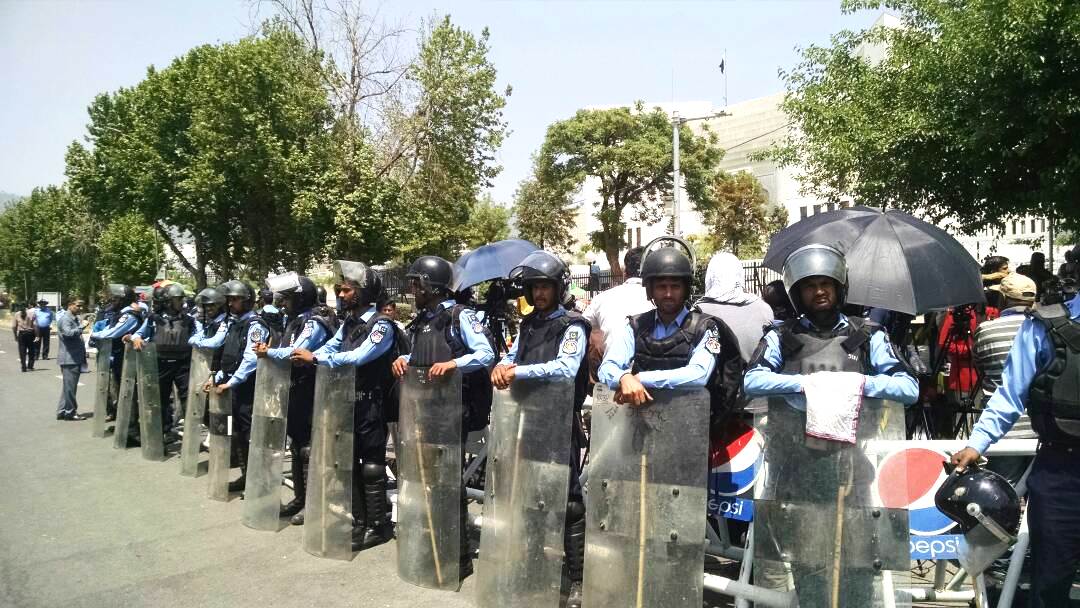 Contingent of police deployed outside of the Supreme Court ahead of the Panama case verdict hearing, on Thursday, April 20, 2017. PHOTO: EXPRESS

The verdict will be announced in Courtroom 1 and only those possessing security clearance passes were allowed in.

Addressing the media outside the SC, Imran Khan said he is optimistic and enthusiastic about the Panamagate verdict. “This is a situation similar to the 1992 World Cup,” Imran said “Today is a day when Pakistan will win.”

The controversy threatens to plunge Nawaz Sharif’s governing party into turmoil ahead of looming general elections, and as security and the economy improve in the militancy-plagued country. It erupted with the publication of the so-called Panama Papers last year, 11.5 million secret documents from Panamanian law firm Mossack Fonseca which documented the offshore dealings of many of the world’s rich and powerful.

Among the global elite implicated were three of Sharif’s four children — his daughter and presumptive political heir Maryam, and his sons Hasan and Hussein. 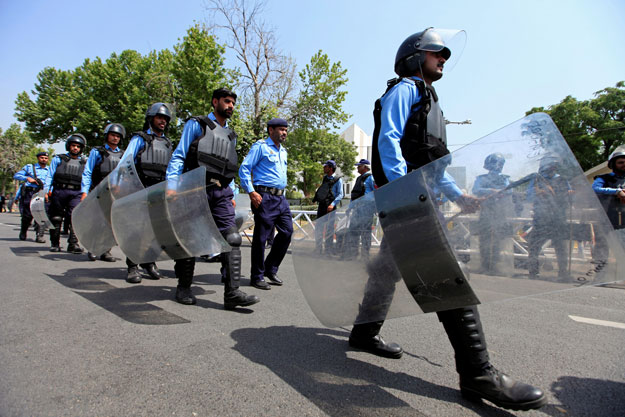 Policemen walk in front of the Supreme Court building ahead of its decision on a case related to the Panama Papers leaks, in Islamabad on Thursday, April 20, 2017. PHOTO: REUTERS

At the heart of the matter is the legitimacy of the funds used by the Sharif family to purchase several high-end London properties via offshore companies. Sharif’s ruling PML-N party insists the wealth was acquired legally through family businesses in Pakistan and the Gulf.

But lawyers for cricketer-turned-politician Imran Khan, leader of Pakistan Tehreek-e-Insaf (PTI) party, argue the paper trail for the funds is non-existent, and say the onus is on Sharif to prove his relatives did not engage in money laundering.

The case has dominated headlines in Pakistan for the better part of a year, though many observers believe the court would be reluctant to directly oust Sharif.

It has repeatedly emphasised it is not conducting a criminal trial, while PML-N lawmakers told AFP that Sharif himself had not been named in the Panama Papers. “We are hopeful the decision will come according to the law of the country, not on expectations of the opposition,” provincial PML-N lawmaker Hina Butt said.

The court has taken such action before, however, holding former prime minister Yousuf Raza Gilani in contempt in 2012 for refusing to re-open corruption investigations into then president Asif Ali Zardari, resulting in his disqualification.

‘Change the course of history’

But the five-member bench could also direct law enforcement agencies to carry out more detailed investigations into the allegations against Sharif, verbally censure him or his children, or clear him entirely.

“The nation is expecting some sort of judgement which will change the course of history in Pakistan,” senior Supreme Court lawyer S M Zafar told AFP, though he said it was difficult to predict the verdict.

Regardless of the outcome, he said, the case was important for Pakistan, which ranked a lowly 116th out of 176 countries in a corruption index released by Transparency International in January.

Political analyst Rasul Buksh Rais said: “It’s going to be (a) historic decision that will push Pakistan into electoral mood in either case,” adding that he did not expect disqualification.

He said a new judicial commission could be in the offing, which would allow Khan to claim moral victory for exposing corruption. “Whether the court convicts him or not today it spells trouble and the prime minister will be weakened,” added Herald newspaper editor Badar Alam.

A five-judge larger bench of the apex court – headed by Justice Asif Saeed Khosa – will hand down its judgment. The bench had reserved its verdict on February 23 after hearing out attorneys from both sides.

Justice Khosa had observed that 26,000 pages were submitted in the Panamagate case and the judges would read ‘each word’ of them. He observed that it was not a case wherein a short order could be passed.

The ruling was delayed by more than a month – at first because all the judges were in different registries of the apex court and then because all five of them were giving their individual input in writing due to the importance of the case.

Despite the weeks-long wait, everyone in Pakistan has been on the edge of their seats, with politicians especially anxious as their future course of action depends on the outcome of the judgment.

In particular, the PTI, which filed one of the petitions against the Sharif family, had voiced concern over the delay saying it was creating uncertainty among the general public.

In a written response to the Panamagate petitions submitted before the Supreme Court in November last year, the premier denied holding any offshore companies, said he had declared all his assets in 2013 and argued that he was not liable for disqualification under Articles 62 and 63 of the Constitution.

Anticipating a Supreme Court verdict against the Sharif family in the Panamagate case, the PTI leadership on Wednesday decided to formally launch its campaign for next general elections by staging a ‘massive public rally’ this week – most probably on Friday – on Islamabad’s Parade Ground.

It is the same Parade Ground where the PTI staged on November 2 its last big gathering – the Thanksgiving Rally – organised after the party had called off its Islamabad lockdown plan in the wake of the Supreme Court’s announcement to take up the Panamagate case.