China vows to take friendship with Pakistan to a new level
19 Sep, 2019 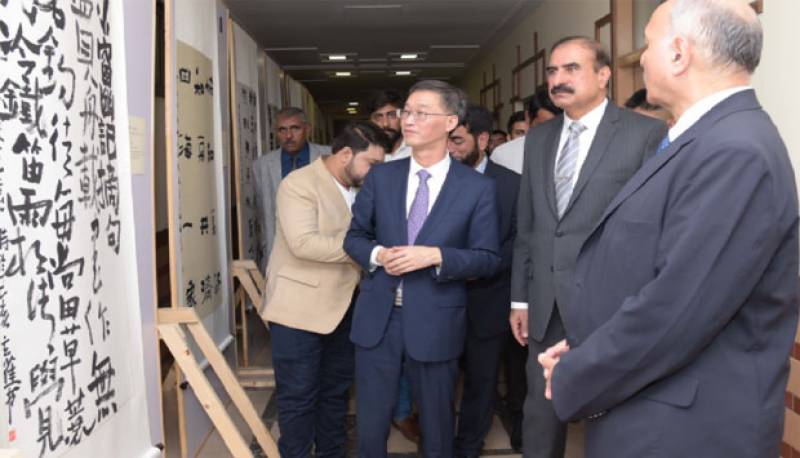 ISLAMABAD - Chinese Ambassador to Pakistan Yao Jing on Wednesday said both the neighboring countries would work together for regional peace and stability.

He was addressing Pak-China's joint exhibition of painting and calligraphy held here to celebrate 70th anniversary of founding of Peoples' Republic of China and 5th anniversary of China Pakistan Economic Corridor (CPEC) at the National University of Modern Languages (NUML).

Speaking on the occasion the ambassador said Sino-Pak excellent diplomatic friendly relations were entering into a new phase, which was economic friendship. Pakistan was the most reliable friend of China and both the countries would work together for regional peace and stability.

Chinese government was focusing at the gross level and offering scholarships for Pakistani students to study in China. He said NUML was playing pivotal role in promoting Chinese language and culture.

Senator Mushahid Hussain Syed in his address said NUML and Pak-China relations were deeply connected with each other. NUML, which was initially NIML, was the premier language teaching institute and Chinese language was being taught here since decades.

He said 70,000 jobs were created through CPEC, Gwadar port and Thar coal project are the mega projects and Thar coal start generating electricity. He praised Chinese government for their poverty alleviation steps and bring millions of people out of poverty.

Pakistan must learn from China to overcome poverty in the country. Earlier, NUML Rector Major General (r) Muhammad Jaffar welcome the honourable guests and briefed them about the university.

He said NUML is multicultural and multilingual university and large number of Pakistani students learning Chinese language. He thanked both the guests and later chief guest along with NUML rector, Mushahid Hussain Syed and DG NUML inaugurated the exhibition.