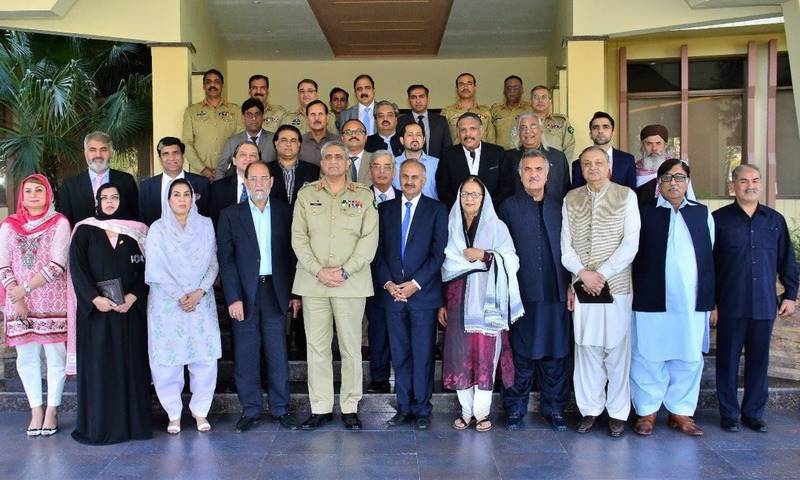 RAWALPINDI - COAS General Qamar Javaid Bajwa has informed the visiting parliamentarians in GHQ that he was an ardent supporter of democracy and believed in the supremacy of parliament. The army chief said he was ready to appear before the defence committee or any ‘committee of the whole House’ and answer any queries that the parliamentarians might have.

He dismissed rumours of the army’s alleged role in the Panama Papers case as unfounded. One of the parliamentarians, quoting the army chief, said the military had no role in ex-prime minister Nawaz Sharif’s ouster, and for him, the current prime minister was as good as the previous one.

Prime Minister Shahid Khaqan Abbasi, during a brief stay in London before heading out to New York for the UN General Assembly session, told media that conspiracies against the Pakistan Muslim League-Nawaz (PML-N) government were continuing. Like his predecessor, he did not elaborate.

During his interaction with the parliamentarians, Gen Bajwa disclosed that he had felicitated Punjab Chief Minister Shahbaz Sharif over the PML-N’s victory in NA-120 (Lahore) by-poll in which Begum Kulsoom Nawaz, spouse of the ousted prime minister, was elected on the National Assembly seat vacated by her husband following his disqualification by the Supreme Court.

Talking about the perception that the defence budget consumed a major portion of national resources, the general said, it comprised nearly 18 per cent of the total budgetary outlay. He added that more money was required, particularly in view of certain acquisitions that had to be made, some of which were overdue.

On the subject of foreign relations, he underscored that putting the house in order was a pre-requisite for getting a respectful position in the comity of nations. As a principle, he said, Pakistan desired good relations with all other countries especially the neighbours.