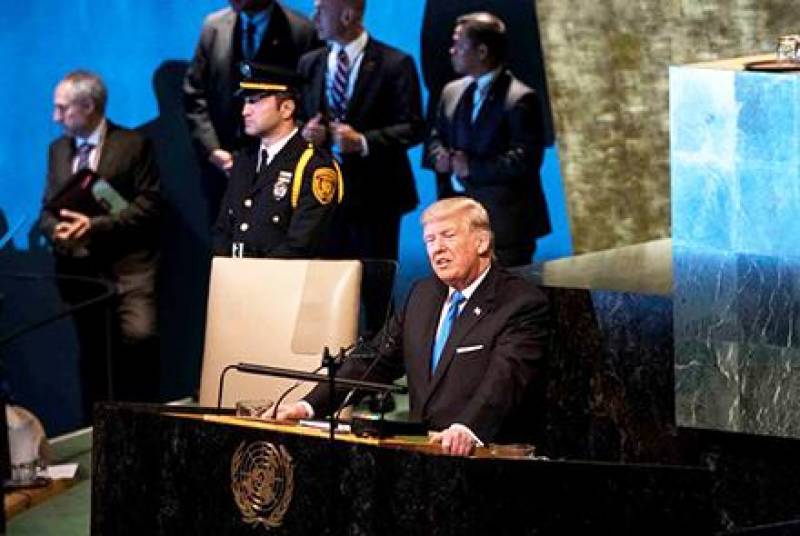 NEW YORK - US President Donald Trump on Tuesday addressed the UN General Assembly in New York where he touched on a wide range of issues with special focus on North Korea and the threats emerging from militant groups across the world including the Taliban and al-Qaeda.  He warned that the United States will be forced to “totally destroy” North Korea unless Pyongyang backs down from its nuclear challenge. He also said the United States will act against countries providing safe havens to al-Qaeda, Hezbollah and the Taliban.  “The United States and our allies are working together... to crush the loser terrorists,” he said.  On his new war strategy on Afghanistan, he said, “last month I announced the new strategy for a victory in the fight against this evil in Afghanistan, from now on, our security interests will dictate the length and the scope of military operations not arbitrary benchmarks and timetables set up by the politicians."  Trump said that a major part of the world faces conflict, and some, in fact, are going to hell. “We must deny the terrorist safe havens, transit, funding and any form of support for their vile and sinister ideology. We must drive them out of our nations. It is time to expose and hold responsible those countries who support and finance terror groups like al-Qaeda, Hezbollah and the Taliban and others that slaughter innocent people,” he said. Trump stated that the US has changed the rules of engagement with the Taliban and all other terrorist groups. “I have also totally changed the rules of engagement with the Taliban in our fight against the Taliban and other terrorist groups,” he said.  He said the US has achieved major success in the fight against Daesh over the past eight months.  Back in August, Trump outlined a revised vision for the US war in Afghanistan, pledging to halt the strategy of nation building in the country and instead institute a more comprehensive policy aimed at curbing insurgency and terror threats from the region against the US, it's interests and its allies.  However Trump did not specify how many more troops will be sent to Afghanistan. But US defense chief James Mattis on Monday reported that the US intends to send in more than 3,000 troops to Afghanistan as part of Washington’s new war strategy.