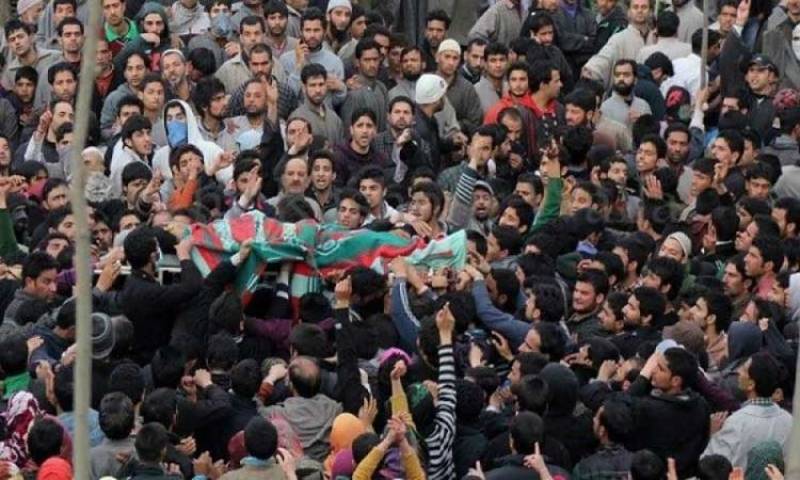 SRINAGAR - In occupied Kashmir, Indian troops in their fresh act of state terrorism martyred two more youth in Kralhar area of Baramulla town, on Friday. These killings raised the number of the martyred youth to nine since Wednesday.

People staged forceful demonstrations in Srinagar, Kokernag, Pulwama, Baramulla and other areas, on Friday, against the surge in killings and other brutalities of the troops across the occupied territory.

The authorities continued to impose restrictions in downtown Srinagar on the second consecutive day, today, to stop people from staging demonstrations against the killings. Juma prayers could not be held at Jamia Masjid in Srinagar due to restrictions.

The All Parties Hurriyat Conference Chairman, Syed Ali Gilani, and other Hurriyat leaders and organizations including Mirwaiz Umar Farooq, and others in their statements paid homage to the recently martyred Kashmiri youth.

Meanwhile, several people including women were injured after Indian army personnel went berserk and thrashed residents at Trichal in Pulwama district following a blast in the area.

The Chairman of Hurriyat forum, Mirwaiz Umar Farooq, in a statement in Srinagar strongly denounced the troops’ action terming it as the worst state terrorism.

Complete shutdown was observed in Pulwama town, today, to demand the mortal remains of a youth, Abdul Rasheed Lone, who was killed by Indian troops in Bandipora district last month.