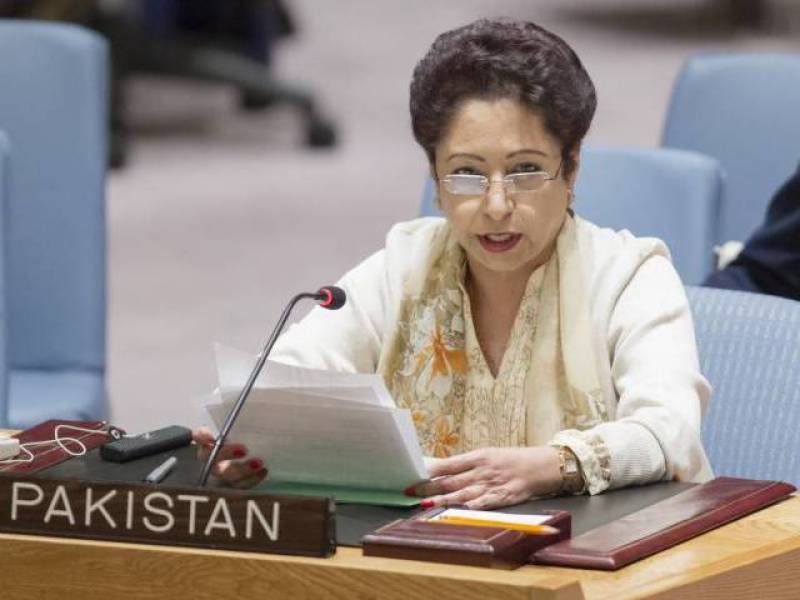 UNITED NATIONS (APP): Expressing concern over Afghanistan's increasing insecurity, escalating violence and growing civilian casualties, Pakistan has told the U.N. General Assembly that sustainable peace in the country was only possible through a negotiated settlement between rival Afghan parties when they conclude that there was no military solution to the conflict.

"A dialogue between the Afghan Government and the Afghan Taliban remains the only way to end Afghanistan's long night of suffering," Ambassador Maleeha Lodhi said in a debate on the situation in war-torn Afghanistan.

Pakistan, she said, was gratified that it's "consistent" position advocating an intra-Afghan dialogue aimed at peace and reconciliation was now confirmed by international consensus.

At the same time, the Pakistani envoy said Afghanistan's reconciliation was being frustrated by local and regional interests that were marginal to the global campaign against ISIS and Al Qaeda-sponsored terrorism.

"These local interests must be pressed by the international community in a concerted way to negotiate peace and enable us all to defeat the global threat of terrorism," she said.

Pakistan, ambassador Lodhi said, stands ready to assist in reviving the stalled dialogue process between the Afghan government and the Afghan Taliban that it facilitated in July 2015. But that process could succeed only if the Afghan parties themselves were willing to pursue the path of dialogue with the unequivocal support and participation of all members of the Quadrilateral Coordination Group, including the United States and China.

The Pakistani envoy added, "Despite the attacks and tensions it faces on its eastern border, Pakistan has decided to attend the 'Heart of Asia' Conference in Amritsar (India) to confirm its commitment to Afghanistan's security and development.

Unfortunately, this 'heart of Asia' continues to bleed also because of the stratagems of the forthcoming host of the Conference."

Afghan peace talks unlikely in near future: US Military Officials

On its part, Pakistan had turned the tide against terrorism, having conducted the world's largest and more effective counter-terrorism operation involving 200,000 troops, but such campaigns were being threatened by external machinations, she said.

She urged Afghan government to shut down Tehreek-i-Taliban Pakistan's safe havens in Afghanistan and end its agencies' collusion with Pakistan's "declared adversary" to foment terrorism in Pakistan.

Pakistan, she said, had consistently urged the Afghan government to cooperate in instituting strict controls along the international border, finalize procedures to address border management and support Islamabad's plan to fence vulnerable points on the Pak-Afghan frontier in order to prevent cross-border attacks.

"I wish to reiterate Pakistan's readiness to work with the Afghan Government, through the High Level Consultation Mechanism, to address border issues".

She said, "The destinies of the peoples of Pakistan and Afghanistan are intertwined and cemented by age-old bonds of kinship, faith and shared history."

Recalling that Pakistan had welcomed over 3 million Afghan refugees over recent decades, she expressed the hope for their safe, dignified and voluntary return.