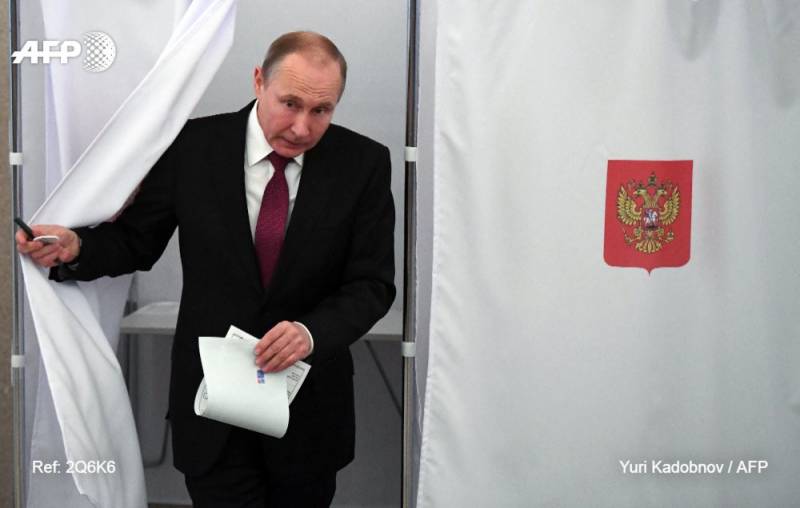 MOSCOW - Vladimir Putin won Russia's presidential election on Sunday with almost 74 percent of the vote, according to an official exit poll, with the opposition reporting ballot stuffing and other cases of alleged fraud.

Putin, who has ruled Russia for almost two decades, stood against seven other candidates, but his most vocal critic Alexei Navalny was barred from the ballot for legal reasons and the final outcome was never in doubt.

The Kremlin was hoping for high voter numbers to give greater legitimacy to Putin's historic fourth term as Russia faces increasing isolation on the world stage over a spy poisoning in Britain and a fresh round of US sanctions.

About 107 million Russians were eligible to cast ballots and the central election commission said turnout was 60 percent, after the authorities used both the carrot and the stick to boost participation.

Selfie competitions, giveaways, food festivals and children's entertainers were laid on at polling booths in a bid to create a festive atmosphere around the election.

But employees of state and private companies reported coming under pressure to vote, while students were threatened with problems in their exams or even expulsion if they did not take part, according to the opposition-leaning Novaya Gazeta newspaper.

The exit poll by state-owned pollster VTsIOM at 1,200 voting stations around Russia projected that Putin had won 73.9 percent of the vote, up from 64 percent six years ago.

Communist candidate Pavel Grudinin performed better than expected, with 11.2 percent according to the exit poll, but the results of all other candidates including former reality TV host Ksenia Sobchak were forecast to be in single figures.

Navalny -- who called on his supporters to boycott the "fake" vote and sent over 33,000 observers across the country to see how official turnout figures differed from those of monitors -- said there had been "unprecedented violations".

His lawyer Ivan Zhdanov said the actual national turnout at 1700 GMT, when polls closed in Moscow, was 55 percent, according to data collected by monitors.

One election commission worker in the republic of Dagestan, which traditionally registers extremely high official turnout figures, told AFP around 50 men entered the station where he was working and physically assaulted an observer before stuffing a ballot box.

But the electoral commission dismissed most concerns, saying monitors sometimes misinterpret what they see.

Since first being elected president in 2000, Putin has stamped his total authority on the world's biggest country, muzzling opposition, putting television under state control and reasserting Moscow's standing abroad.

Casting his ballot in Moscow, Putin said he would be pleased with any result giving him the right to continue as president.

"I am sure the programme I am offering is the right one," said the man who is already Russia's longest-serving leader since Stalin.

Most people who spoke to AFP said they voted for Putin, praising him for restoring stability and national pride after the humiliating collapse of the USSR.

"After he brought Crimea back, he became a hero to me."

Sunday marks four years since Putin signed a treaty declaring Crimea to be part of Russia in a move that triggered a pro-Kremlin insurgency in east Ukraine, a conflict that has claimed over 10,000 lives. -APP/AFP