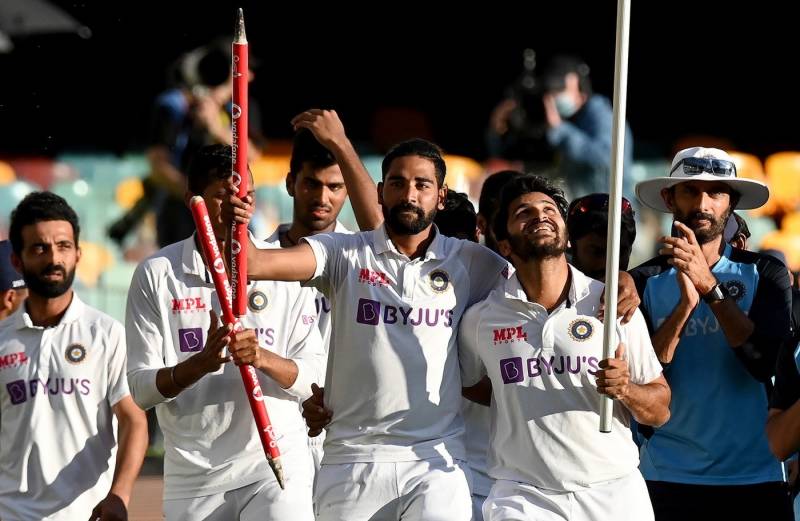 Brisbane (Agencies): India pulled off a record run-chase in a thrilling final session to hand Australia their first defeat at Brisbane’s Gabba ground since 1988 and clinch the four-Test series 2-1 on Tuesday.

Wicketkeeper Rishabh Pant starred with a swashbuckling 89 not out as the injury-depleted visitors overhauled the 328-run target with three overs to go, winning by three wickets.

Australia had not been beaten at the Gabba since falling to Viv Richards’ all-conquering West Indies side by nine wickets in November 1988. India’s 329 for seven also smashed the 69-year-old record for the biggest run-chase at the Gabba, set by Australia who scored 236 for seven to beat the West Indies in 1951.

The series win was a remarkable achievement considering India were bowled out for their lowest Test score of 36 to lose the first Test in Adelaide, before bouncing back to win the second in Melbourne. The visitors, ravaged by injuries and captain Virat Kohli’s absence for paternity leave, then batted throughout the final day to draw the third Test in Sydney.

Man-of-the-match Pant, who played a similar innings in the drawn Sydney Test, blasted his 89 from 138 balls with nine fours and a six. His innings followed an equally impressive knock from 21-year-old Shubman Gill, who made 91 at the top of the order earlier in the day.

Cheteshwar Pujara’s 56 was also vital, the gritty number three hit 10 times by Australia’s quicks, taking blows to the fingers, arm, ribs and head as he was subjected to a searching examination by Pat Cummins and Josh Hazlewood. Cummins with 4-55 was easily the pick of the Australian attack, sending down 24 overs of pace and hostility, but the rest of the bowlers looked fatigued after bowling all day in Sydney just eight days ago.

Despite Australia’s fearsome record at the Gabba, the Indian batsmen showed no fear and never looked interested in playing for a draw, even after losing the wickets of Pujara and Mayank Agarwal after tea. Pant took advantage of any loose ball, but also played some outrageous strokes, showing the influence T20 cricket has had on Tests. India started the morning on four for no loss after bowling Australia out for 294 just before rain stopped play late on the fourth day.

Australia’s hopes of a series-clinching victory were raised early when Cummins drew Rohit Sharma forward to a ball that caught the outside edge, Tim Paine taking a fine diving catch in front of first slip.

But as India have shown since their capitulation in Adelaide, when they were bowled out for 36, they are never out of the contest. Their effort in the fourth Test is even more admirable considering the high injury toll on tour. Their bowling attack was led by Mohammad Siraj, who debuted in Melbourne, supported by Navdeep Saini, Shardul Thakur, T. Natarajan and Washington Sundar, who had two Tests between them heading into Brisbane.

The tourists were without the services of front-line seamers Ishant Sharma, Mohammad Shami, Umesh Yadav and Japrit Bumrah and regular spin bowlers Ravi Jadeja and Ravi Ashwin. They were also missing regular captain Kohli, who went home after the first Test to be with his wife for the birth of his first child.

After just one wicket in the first session, Australia could only manage two after lunch, with Gill falling for his superb 91 and skipper Ajinkya Rahane a quickfire 24. Gill was magnificent on a fifth-day wicket, smashing the Australian bowlers to all corners of the ground.

He hit eight fours and two towering sixes in his 146-ball innings before he became Nathan Lyon’s 398th Test victim, edging an arm ball to first slip where Steve Smith took a sharp catch. With Pujara putting down the anchor at one end, Rahane raced to 24 from just 22 balls.

But trying to glide a Cummins short ball over the slips, he only managed to get a faint edge to Australian ‘keeper Tim Paine to leave India 167 for three. India looked in control through the final session and despite three wickets falling in the last hour, they cruised home with three overs to spare, Pant hitting the winning four off Hazlewood.