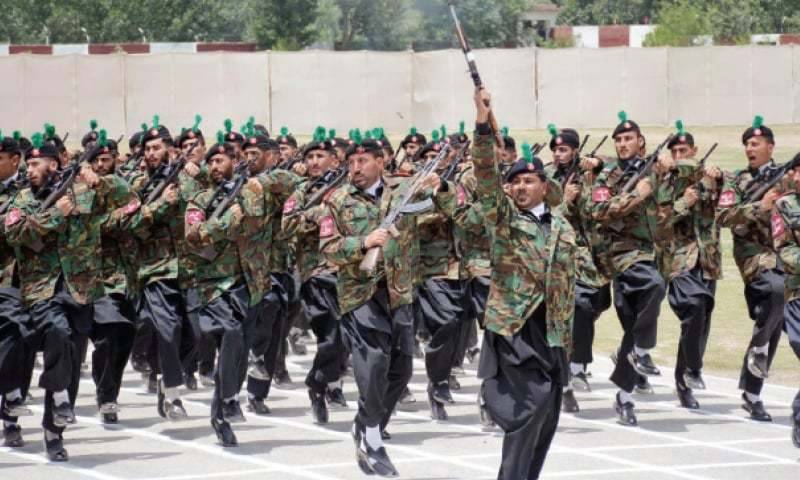 The Khyber Pakhtunkhwa Governor Engr. Iqbal Zafar Jhagra paid tribute to the bravery and sacrifices of officers and Jawans of Frontier Constabulary.

He said that the entire nation stood united with our security forces in the war against terrorism to protect the motherland from the external and external enemies.

He expressed these views while addressing as chief guest at the passing out parade of jawans of Frontier Constabulary at the Training Centre, Shabqadar, in District Charsada on Wednesday.

Commandant Frontier Constabulary, Liaqat Ali Khan, senior officials and relatives of the recruits were also present on the occasion.

He said our security forces are fighting the war against terrorism with the spirit and belief for the sovereignty and integrity of the country.

"We are proud of those officers and Jawans of our security forces who laid down their lives for protection of motherland and the Nation has great regard for the security forces and held their sacrifices in high esteem," he said.

On this occasion, 1975 Jawans of Frontier Constabulary passed out after completing their 9-months training in the academy.

The Governor announced the amount of Rs 2 million for the training of recruits and Rs 1 million for the welfare of the Frontier Constabulary and also distributed certificates and trophies among the position-holders and best recruits.

He inspected the parade and congratulated successful recruits. A smartly tuned contingent of Frontier Constabulary presented guard of honour to the governor.

While addressing the passing out parade, the Governor urged the recruits to ensure the protection of the country adding that great responsibilities lied on the shoulders of the passed out recruits to make the most of their expertise and potential while performing their duties with commitment.

Governor said peace has been restored in the country due to the great sacrifices rendered by our security forces adding that maintenance of lasting peace was the top priority of the incumbent government. He said the role of our security forces in the war against terrorism and to bringing peace to the region was admirable.

The governor lauded sacrifices rendered by the FC personnel and said that the martyred soldiers deserved tributes, adding that their sacrifices would not go in vain and would be remembered with dignity.

He said that those FC troops who laid down their lives for protection of motherland were in fact the real heroes. He held his assurance that he will contact the federal government and other concerned quarters to further enhance the capacity building and training of the troops and to redress their problems on priority.

Earlier, FC Commandant Liauqat Khan appraised the Governor about the training and problems of the force. He said that FC was also performing duty at operational areas in FATA.

On his arrival at the FC Training Centre, the Governor was received by the Commandant FC, Liaqat Ali Khan and other senior officers.

Addressing the inaugural ceremony, the Governor said the incumbent government of Prime Minister Muhammad Nawaz Sharif was keen to alleviate the poverty, backwardness and reduce the sense of deprivation of the depressed section of the society.

He said the purpose to establish the Sweet Home was to accommodate those children who have lost their fathers and live in poor socio-economic conditions. He said steps been taken to provide the better accommodation and quality education to the poor and deserving children to prevent them from going into the un-healthy activities, so that they could play their due role in the development of the country.

Governor also announced the amount of Rs 1 million for Pakistan Sweet Home Mardan and assured that the budget for the Pakistan Baitul Maal will be appropriated in the next fiscal year. He said that the government was well aware of the problems and difficulties of the poor and deprived people and said that all out efforts were being made for the well being of the people and for the development of the country.

He said that the government was aware of its responsibilities to remove the difficulties of the poor adding that the establishment of Pakistan Bait ul Maal, PM Health Insurance Program, PM Youth Programme, BISP and other welfare institutions was the real manifestation of it.