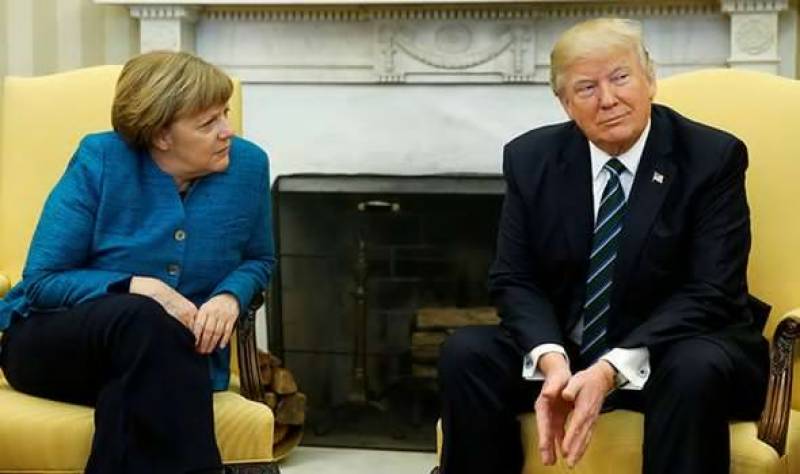 A video showing Donald Trump refusing to shake hands with Angela Merkel during a joint appearance is making rounds on the internet, reminding everyone that the US president will never learn.

Though Trump greeted her with a handshake at the White House on Friday, Trump seemingly ignored photographers’ request to the two to shake hands.

In the video, Merkel can be seen saying: “do you want to have a handshake?" Trump turns and looks at her but continues sitting in the same position. Merkel looks at the camera and smiles—kind of embarrassingly.

The veteran chancellor arrived at a snowy White House, hoping to reverse a chill in relations after Trump´s tough election rhetoric.

The two leaders shook hands and smiled for the cameras before entering the West Wing, for a meeting that had been delayed three days because of bad weather.

The unlikely pair—a cautious German chancellor and impulsive US president—moved to the Oval Office, hoping to narrow differences on immigration and NATO but also Russia and global trade.

Before coming to office in January, the US president called Merkel´s acceptance of refugees a "catastrophic mistake" and said she was "ruining Germany."

He also demanded that countries like Germany step up defence spending, a sensitive issue for a nation that has had a strong pacifist tradition since World War II and proselytises fiscal prudence.

In a similar vein, Merkel has sought to remind—some in the White House would say lecture—the real estate mogul about democratic values.

Any "close cooperation," she said, must be on the basis of the "values of democracy, freedom, respect for the rule of law and human dignity, regardless of origin, skin color, religion, gender, sexual orientation or political belief."

Comments like that have prompted some of Trump´s fiercest critics to declare Merkel the new "leader of the free world"—a moniker normally taken up by the occupant of the White House.