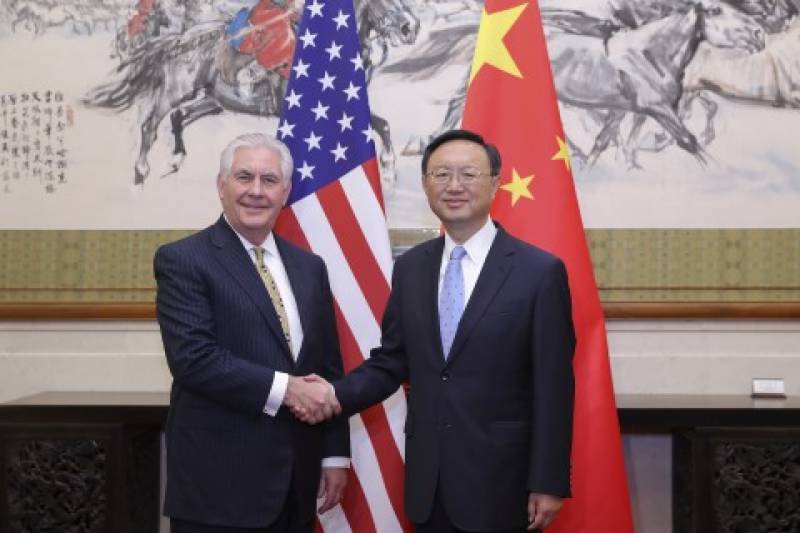 BEIJIN: China urged the United States to remain “coolheaded” over North Korea and not to turn its back on dialogue, as visiting Secretary of State Rex Tillerson expressed a “sense of urgency” to curb dangerous levels of tension on the Korean Peninsula.

On his first trip to Asia this week, Tillerson had earlier declared that diplomacy has failed to persuade North Korea to abandon its nuclear program, and that a new approach was needed. On Friday in Seoul, he warned ominously that all options were on the table to counter the threat from Pyongyang.

President Trump weighed in Friday by goading China over Twitter for not doing enough to help prevent its ally from “behaving very badly.”

But in a joint news conference Saturday with his Chinese counterpart, Tillerson struck a more diplomatic note, choosing to play down differences with Beijing and stress that both countries share the goal of a denuclearized Korean Peninsula.

“We share a common view and a sense that tensions on the peninsula are quite high right now and that things have reached a rather dangerous level, and we’ve committed ourselves to doing everything we can to prevent any type of conflict from breaking out,” Tillerson said.

Chinese Foreign Minister Wang Yi agreed, but also had some advice for his American counterpart.

“No matter what happens, we have to stay committed to diplomatic means as a way to seek peaceful settlement,” he said. “We hope all parties, including our friends from the United States, could size up the situation in a coolheaded and comprehensive fashion, and arrive at a wise decision,” he said.

In February, China suspended coal imports from North Korea for the rest of the year, a move that cuts off the regime’s major financial lifeline. Wang pledged to maintain U.N. sanctions on North Korea but said Security Council resolutions had also included “clear provisions for efforts to resume talks to de-escalate the tension and to safeguard stability on the peninsula.”

North Korea has amassed a sizable nuclear stockpile and appears at the brink of being able to strike the U.S. mainland and American allies in Asia. The situation has emerged as a major, early foreign-policy test for the new Trump administration.