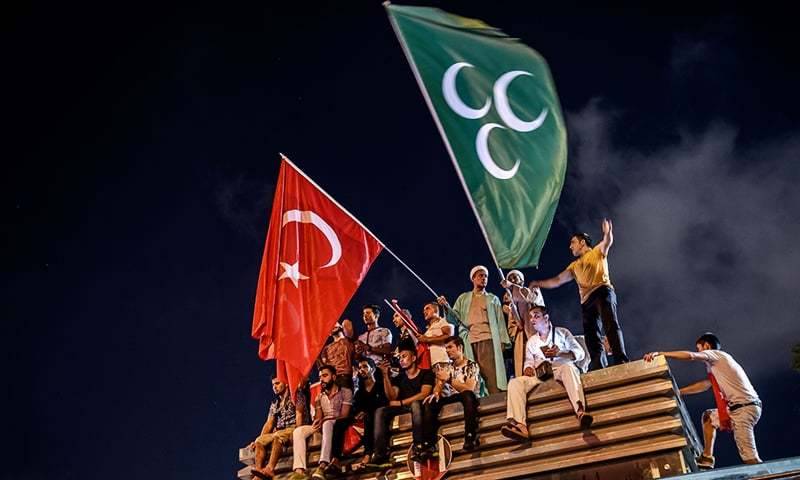 ISTANBUL: (APP) Turkish security forces on Monday carried out new raids against suspected plotters of the botched coup against the rule of President Recep Tayyip Erdogan, as international concern grew over the scale of the crackdown.

The authorities have said around 6,000 people have been detained so far in the investigation into Friday's coup which Erdogan has blamed on his arch enemy the US-based preacher Fethullah Gulen.

Reports had said that a total of 36 generals had been detained so far. The Dogan agency reported Monday that 10 of them had now been remanded in custody by the courts.

Erdogan has urged citizens to remain on the streets even after the defeat of the coup, in what the authorities describe as a "vigil" for democracy.

New demonstrations of support were held throughout the country on Sunday night, AFP correspondents said.

According to Anadolu, 1,800 additional elite special police forces have been drafted in from surrounding provinces to ensure security in Istanbul.

Eleven soldiers suspected of involvement in the coup were detained Sunday at Istanbul's Sabiha Gokcen airport on the Asian side of the city in an operation that saw shots fired in the air, Turkish television reports said.

Leaders including US President Barack Obama and German Chancellor Angela Merkel have urged Turkey to follow the rule of law in the wake of the coup.

EU foreign policy Chief Federica Mogherini said on Monday that the rule of law needed to be protected for the sake of the country.