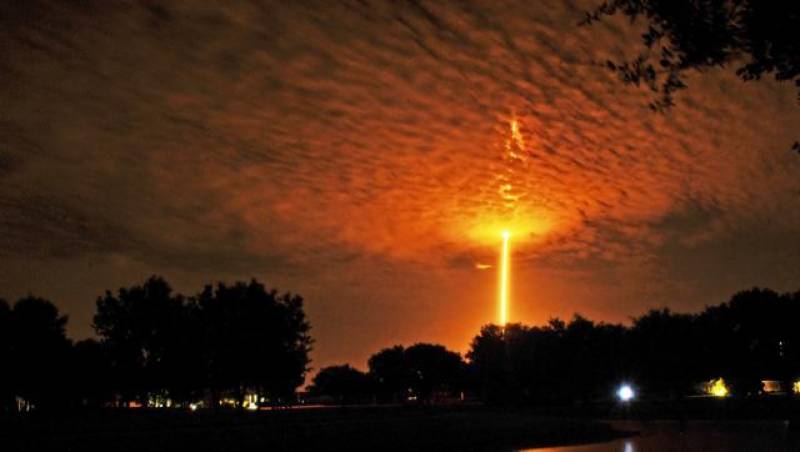 MIAMI: (APP) A SpaceX rocket blasted off Monday toward the International Space Station, carrying a load of supplies including a docking adapter that future spaceships will use to park at the orbiting outpost.

"Falcon 9 is on its way," said a commentator at SpaceX mission control as the white rocket launched under a dark night sky from Cape Canaveral, Florida at 12:45 am (0445 GMT).

Following the launch, the rocket separated, sending the cargo to orbit as the first stage of the rocket successfully fired its engines again to maneuver its way back to land on solid ground at Cape Canaveral insert between paras

SpaceX mission control erupted in cheers as live video footage showed the first stage of the rocket landing steady and upright, marking the second such solid-ground touchdown for SpaceX.

It first accomplished the feat in December 2015, as part of the

California-based company's ongoing effort to re-use costly rocket parts instead of jettisoning them into the ocean.

The nearly 5,000 pounds (2,300 kilograms) of cargo on board includes an international docking adaptor which will function as a parking spot for commercial space taxis in the coming years.

A previous version was destroyed -- along with $118 million in equipment -- when SpaceX's rocket exploded in June 2015 shortly after liftoff, due to a faulty strut that allowed a helium tank to break loose and caused the blast.

The docking adaptor is the first of two to be sent to the ISS, and will enable future arrivals by privately owned spaceships which are under construction by SpaceX and Boeing.

These commercial crew vehicles will restore US capability to send astronauts to space, following the 2011 retirement of the space shuttle program which has left Russia's Soyuz capsules as the world's sole means of crew transport.

According to NASA, the Boeing-built docking adaptors will function automatically, making it faster and easier for spaceships -- including the

Boeing Starliner and SpaceX's Dragon crew vehicle -- to come and go from the station.

"It used to be, in the old days, you had to do it the hard way and dock manually," said NASA's Steve Payne.

"This has all the instrumentation that will allow spacecraft to come do it all automatically and it is a whole lot lighter workload on the crew."

The Dragon cargo vehicle is expected to arrive early Wednesday, when astronauts will use the outpost's robotic arm to grab the incoming spacecraft and attach it to the station.