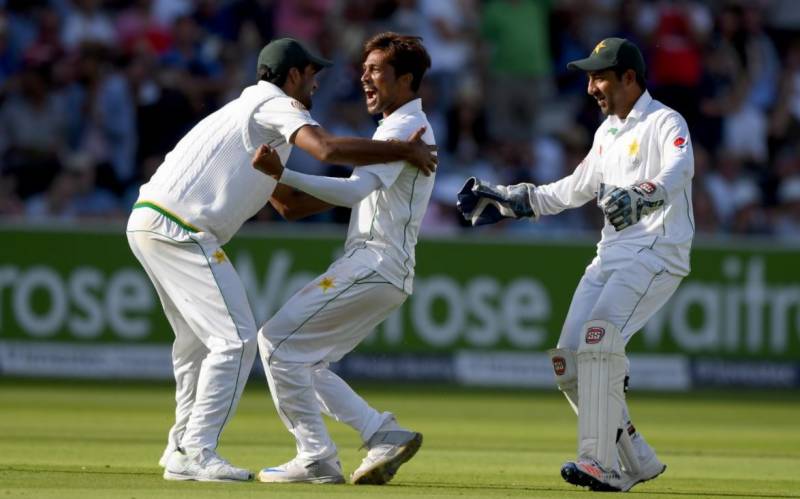 LONDON (APP) - Pakistan captain Misbah-ul-Haq said Mohammad Amir could start a "new life" after he completed his return to he scene of his spot-fixing shame by rounding off victory over England in the first Test at Lord's on Sunday.

The corresponding Test match between England and Pakistan at Lord's in 2010 saw teenage sensation Amir take a superb six for 84 to secure a coveted place on the dressing room honours board.

But that feat was utterly overshadowed when it was revealed the 18-year-old had deliberately bowled no-balls as part of a newspaper 'sting' operation.

Together with new-ball partner Mohammad Asif and then captain Salman Butt, Amir was given a five-year ban from cricket and a jail sentence.

But this was his first Test appearance since 2010 and the now 24-year-old wrapped up just Pakistan's fourth win in 14 Tests at Lord's when he bowled last man Jake Ball to secure a 75-run victory with more than a day to spare.

"That was a special moment for him," said Misbah, who in his first Test appearance at Lord's had earlier made a superb century "That could be the start of a new life," he added.

"And I think, I hope he'll perform like that, and proves to everybody (that he can) just be really a good man, a good cricketer and good human being now."

Misbah added: "He's so lucky he got another chance, now it's a new life for him."

And the veteran skipper predicted the left-arm quick would only get better in the rest of the four-Test series after overcoming the emotional hurdle of his Lord's return.

"He will definitely get better because sometimes there is some sort of mental block, because that had happened here, especially at this venue. "So that obviously comes into your mind.

"Now it's over he can really be more effective in the Pakistan team," insisted Misbah ahead of the second Test at Manchester's Old Trafford, which starts on Friday.