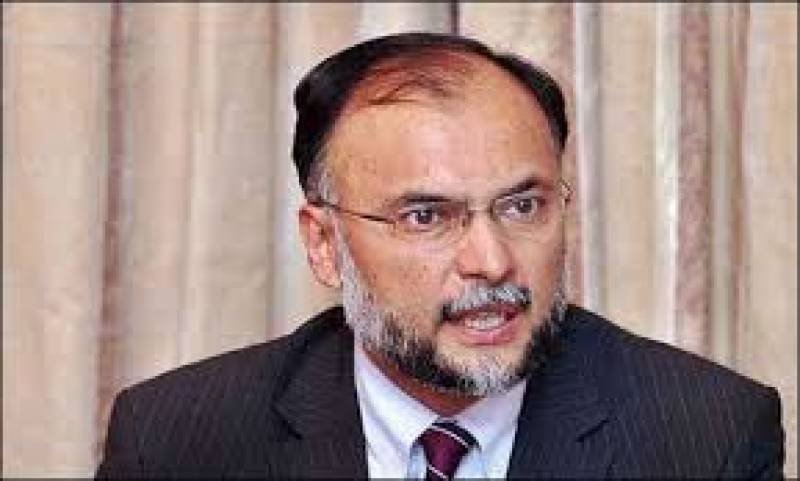 ISLAMABAD (APP): Federal Minister for Planning, Development and Reform Ahsan Iqbal said Sunday all the conspiracies being hatched against the Pakistan Muslim League-N (PML-N) government would fail as the country was leading towards progress and development.

The minister, in a statement, said he was astonished to see a sponsored campaign against the PML-N government by some elements having vested interests.

"Those who have failed politically, now want civil and military confrontation for their ulterior motives," he said, adding the people could see and feel that the country was gradually improving and getting better.

"The direction is right and we need to keep marching with stability and consistency of policies," he added.

The minister said when the PML-N government took office in 2013, Pakistan was titled as most dangerous country in the world by Newsweek on its cover, however, today Pakistan was seen as an Emerging Market and was rated among top eight fastest growing economies of world.

He said Pakistan was seen as a sick economy likely to default in 2014 with falling ratings in 2013 but today Moody's and Standard and Poor’s world's leading rating agencies have upgraded Pakistan and rate it as a stable and positive economy.

He said in 2013, Pakistan's stock market had crashed today, by crossing 39,000 index, it was at all time high while in in 2013, Pakistan was stuck for six years at 2.5-3.5% GDP rate and last year we posted 4.7% GDP growth rate and hoping for 5.5% this year while the country is at highest growth level in last eight years.

The minister said in 2008, Pakistan was delisted from Emerging Market Index. In 2016, it had been again relisted by Morgan Stanley as an Emerging Market.

Likewise in 2013, he said, when the PML-N took over extremists had made the state hostage and they were on offensive, today state was on offensive and terrorists were under siege. Karachi security operation, started in September 2013 by the Prime Minister, had today given peace back to the mega city, the financial capital. Pakistan's security situation was best in last ten years.

The minister said no foreign investor was willing to bring a dollar into Pakistan back in 2013, but during 2015 the PML-N government attracted $46b CPEC investment from China, which had been acclaimed as a game changer for Pakistan by experts.

During last 14 years, he added, no worthwhile investment was made in energy, however due to the PML-N government initiatives more than 10,000 mw would be added to grid by 2018 and another 15,000 mw was in pipeline for addition by 2025.

He said the PML-N government had initiated and committed the highest ever investment for modernising Pakistan's energy (coal, hydel, renewable, gas projects) road, rail & air infrastructure, which wouldl transform the economy in next few years.

The minister said in 2013, the PML-N inherited sick and dysfunctional railway and PIA and now locomotives and planes had been procured and both organisations were on path of recovery.

He said in 2013, when the PML-N came into government investments into higher education had been cut while today, the highest ever investments of Rs 80 billion were being made in higher education through HEC to give "our youth knowledge and skills of future economy. 10,000 Ph.Ds in next ten years programme through US-Pak Knowledge Corridor has been started."

The Pakistan Economic Watch (PEW), a reputed international survey organisation, in its latest poll said that after over fifteen years for the first time majority of Pakistanis are feeling optimist about their future and think that next year will be better than previous year. Nation has got hope back, he added.

The minister said he could go on and on with the stories of successes the PML-N government had achieved in a limited time of threeyears while the world economy was facing major slow down.

This was not to say that there are no challenges and problems, he said. "We would tackle each and every problem step by step and are committed to see Pakistan in top 25 economies of the world by 2025."

He said the government has already prepared Vision 2025 document to lead the country towards development.

"Let us defeat the voices which want to kill our hope and pride. Pakistan is rising and rise In Sha Allah to glory unseen in history. We need to stand united, defend our political stability and commit ourselves to working harder, better and smarter."