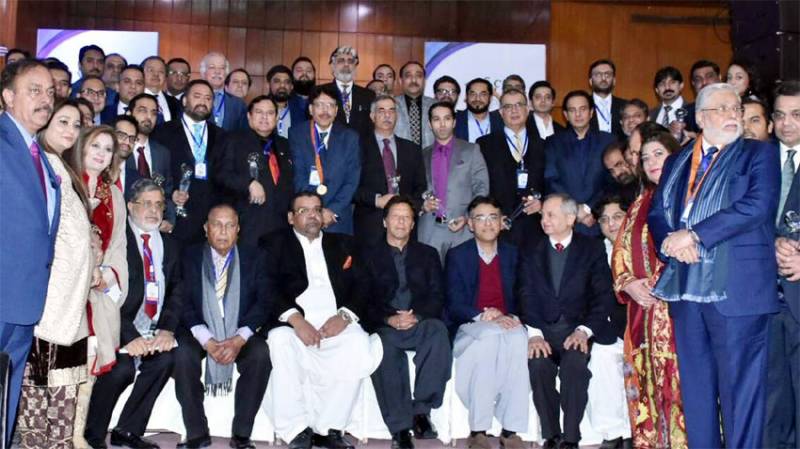 Prime Minister Imran Khan says government is working to facilitate small and medium industry and exporters of the country.

Addressing the 42nd award ceremony of Federation of Pakistan Chambers of Commerce and Industry in Islamabad, he said the government would introduce fundamental reforms to restructure the economy and strengthen domestic industry.

He said obstacles in the way of doing business will be removed to give boost to small and medium enterprises.

The Prime Minister said government had decided to establish exclusive offices at PM Office to handle the issues related to ease of doing business.

He reiterated government's commitment for a frequent interaction with the business community to take their input and to know the impact of the government policies.

He said several steps have already been taken to facilitate the export industry.

The Prime Minister said country will be increased prosperity through commerce and industry.

Imran Khan said our exports of 24 billion dollars are meager keeping in view the size of our population and economy.

The Prime Minister said for the first time reforms were being brought in the taxation system where tax collection and tax policy wings had been separated in Federal Board of Revenue.

Chairing a meeting in Islamabad, the Prime Minister reiterated his government’s priorities to support farmers in adopting the modern practices.

He approved setting up of a working group, headed by the Minister for National Food Security, to revamp existing seed registration institutes to bring about qualitative improvement in their output.

The meeting reviewed challenges being faced by the country in cotton sector and the way forward towards uplifting the agriculture sector.

The Prime Minisdirected to review existing rules relating to biosafety assessment of genetically modified crops to make them more simple, efficient and time-saving.

He emphasized the need for revamping of research centers involved in seed registration to bring focus to their work.

Later, he was informed that cotton is Pakistan's second largest crop planted on 6.66 million acres.

Despite being the 4th largest cotton producer in the world, the country is still importing raw cotton worth 1.2 billion dollars.

Talking to members of National Assembly belonging to Gujranwala and Faisalabad Divisions in Islamabad, Imran Khan said the government is focusing on true social welfare of the people, prosperity, and economic development of the country.

The Prime Minister directed the elected members to ensure implementation of the public welfare and other social uplift projects.