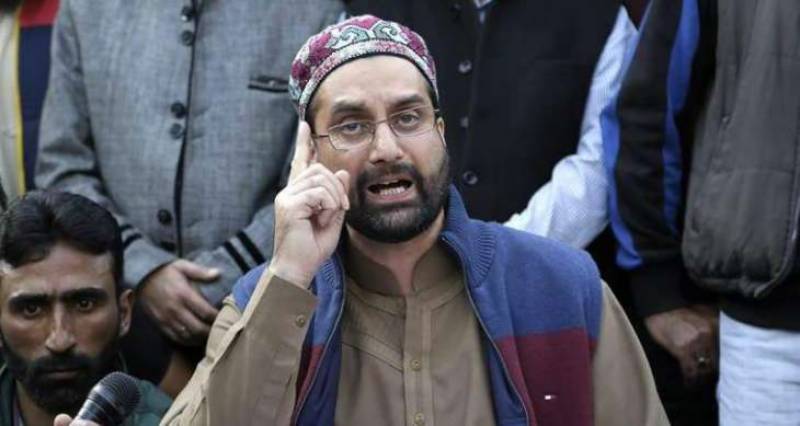 ISLAMABAD: Indian police arrested the Chairman of Hurriyat Forum Mirwaiz Umar Farooq, and the Chief of Jammu and Kashmir Liberation Front (JKLF), Muhammad Yasin Malik after they tried to lead a march towards Indian army headquarters in Badami Bagh, Srinagar.

According to Kashmir Media Service (KMS), Mirwaiz Umar Farooq was arrested after he defied his house arrest and tried to march towards Badami Bagh army base in Srinagar as a mark of protest against the civilian killings by Indian troops in Pulwama on Saturday.

As Mirwaiz came out of his Nigeen residence and tried to march along with dozens of his supporters towards the Badami Bagh base, a police contingent deployed near his residence thwarted the march and detained the Mirwaiz and his supporters.

Muhammad Yasin Malik, who had gone underground to evade arrest, was also detained when he took out the march from Gaw Kadal area of Srinagar along with his supporters. As he reached Budshah Bridge, police swung into action and arrested him along with many of his supporters.

The protesters said that police fired teargas shells to foil the protest.

Call for the march towards the army headquarters was given by the Joint Resistance Leadership against the massacre of around a dozen Kashmiri youth by Indian forces in Pulwama on Saturday.

Meanwhile, Islamic political Party Chairman Mohammad Yusuf Naqash was also arrested by police on Sunday evening. “Naqash was arrested from his residence, and lodged in Safakadal Police station,” his party said in statement.